For a California girl, I’ve been spending a lot of time thinking about Virginia. An inordinate amount of time. Why? Because I see your election, Virginia Democrats, and I feel your pain. Not too long ago, we too lived in fear that our great blue state would be taken over by a Trump ideologue who would worsen our lives in every conceivable way. Our hard work was rewarded, however. Despite the daily prognostications of doom, on election day Gov. Gavin Newsom definitively retained his leadership.

But the media always love a horse race, and five days out from the end of Virginia’s statewide elections, vulnerable Democrats are still in disarray! 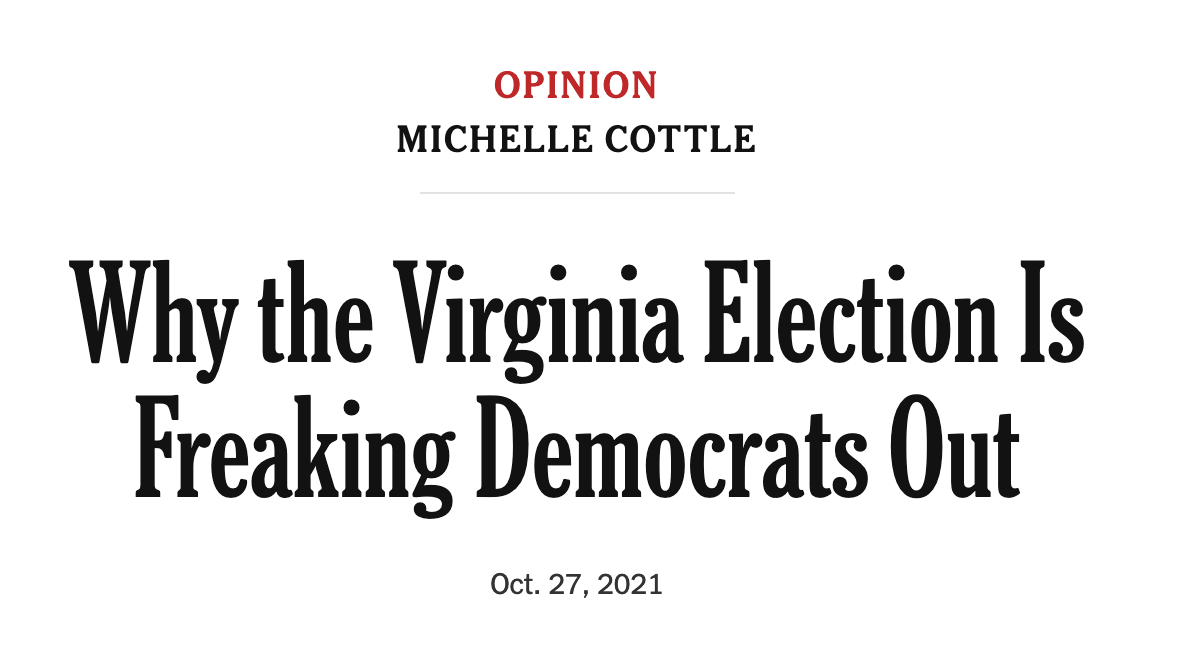 A number of factors lean in Democrats’ favor like incumbency, fundraising totals, popular policies (including managing the COVID-19 response), an impressive early voting lead, and increasing vote margins over the past five years. That doesn’t stop the media from floating a host of dire possibilities. Yes, Republicans could outperform Democrats on Election Day but Democrats could increase their House majority to 60 (up from 55).

Still, if a voter in Virginia pays too much attention to the media, which has identified about 10 to 12 competitive Democratic races for the state legislature, they are likely to view blue victories as a mirage. Unfortunately, the media seems to be taking their cues from Republicans, who are targeting 10 districts that have a Democratic lean ranging from D + 0.1 to D + 11. Huge difference!

One of these “vulnerable” Democrats is Rodney Willett (HD-73, D + 4.5). Willett represents a suburban district, and these, the Washington Post says, “could swing either way.” Never mind that Willett’s district voted for Biden by 20 points.

In fact, the numbers from the 2020 presidential election show that Biden won 60 of the 100 Virginia state house districts with the lowest margin of victory 5.58%. By contrast, Trump won five of the remaining 40 districts by less than 5%.

Daily Kos Elections points out, “Those off-year electorates had often been unkind to Team Blue downballot in the Old Dominion, which is why Biden’s performance shouldn’t be taken as a definitive benchmark.” True, but the mainstream media invests little time and energy in anything other than “Democrats are in disarray and vulnerable,” and then further muddies the water with the message that any Democratic loss surely signals doom for the entire party!

One welcome exception is Joan Walsh’s recent article in The Nation, which highlights compelling progressive female candidates who might just win.

Why are the media so slanted? Is it because their corporate owners would see pain inflicted to their bank accounts should a Democratic tax wishlist become law?

Or perhaps the problem is even more pernicious: maybe the media are addicted to the starring role they have played in American society since Trump rode down that golden escalator.

We may indeed wake up to a much redder Virginia on Nov. 3. To pay attention to the media, however, you would never imagine that the commonwealth could also turn a deeper shade of blue.

Rena Korb is a professional writer and editor. Her publications span from children’s books to political commentary. She volunteers as a DemCast California captain and as a leader with her local Indivisible chapter. She also is a lifelong activist, attending her first protest when she was 16. She lives in San Mateo with her family and, in non-pandemic times, enjoys playing Ultimate frisbee.

Jan. 6, Pipelines, Build Back Better – Your Calls to Action!

Here are some NEW RULES. These are Michigan Governor Gretchen Whitmer’s rules.

As an African American, I have never liked the label “Angry Black

DemCast joins more than 60 progressive groups called for the