Let’s talk about one battle Trump will certainly lose: His fight to keep his tax returns out of the hands of Congress. I also wrote about that this past week in this Washington Post article: 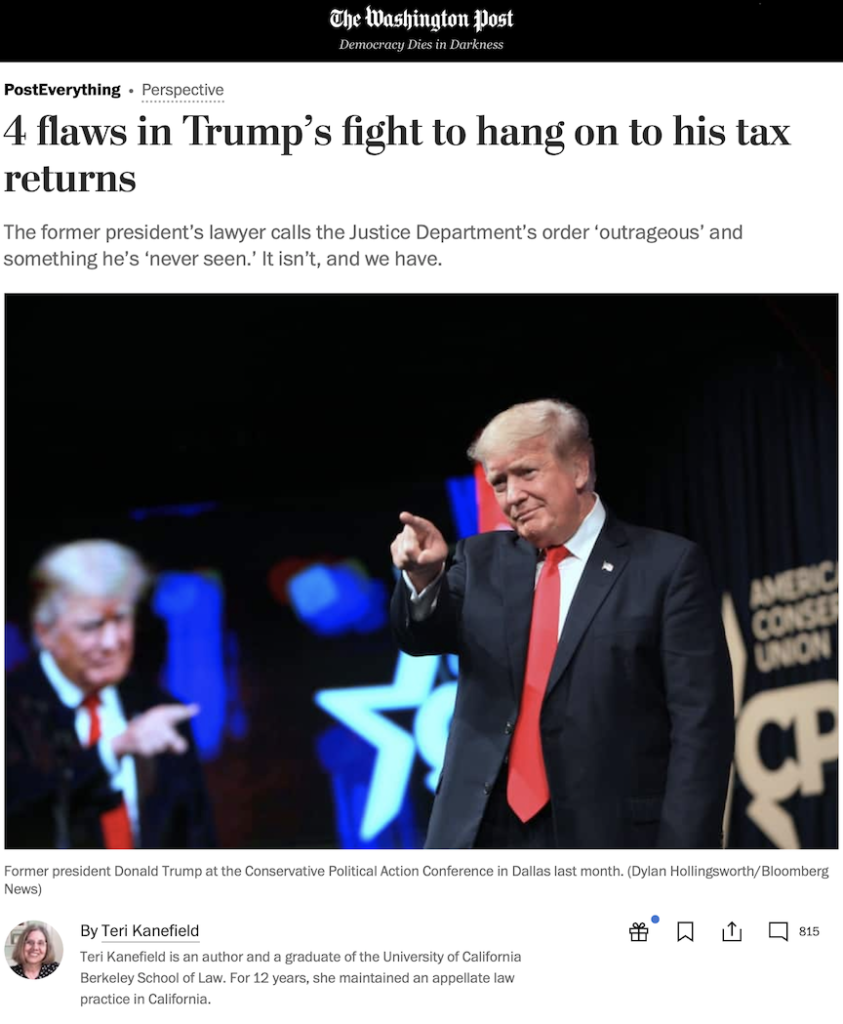 So, here’s what’s going on. Last week the Department of Justice ordered the Internal Revenue Service to hand over Trump’s tax returns to Congress. On Monday, Ronald Fischetti, a lawyer for Trump, said Trump intends to fight the order.

He also made this statement to the press:

“There is no evidence of any wrongdoing here and I object to the release of the returns not only on behalf of my client but on behalf of all future holders of the office of the president of the United States.”

He added that “this politicization and harassment of Mr. Trump is uncalled for and outrageous” and that he had “never seen anything like this.”

There are four gaping holes with this statement.

First, there is considerable evidence of wrongdoing. To begin with, the Trump Organization was indicted for tax fraud and falsification of records in what prosecutors described as a 15-year tax avoidance scheme “constituting a systematic ongoing course of conduct with intent to defraud.”

Trump’s former longtime personal lawyer Michael Cohen testified before Congress about crimes he said he had committed at Trump’s behest. Those crimes included misusing charity funds, and bank and insurance fraud. Cohen testified that Trump inflated or deflated the value of properties depending upon his needs at a given moment. Cohen presented copies of Trump’s bank and financial records to back up his claims.

On Sept. 27, 2020, The New York Times published information it obtained from Trump’s tax records extending over more than two decades. The records showed that, despite Trump’s repeated claims that he was a successful businessman and a billionaire, he paid no income tax at all in 10 of the 15 years preceding his presidency. These records revealed struggling properties, outsize tax write-offs and a taxpayer in serious trouble with hundreds of millions of dollars in debt coming due.

Fischetti’s statement that there is “no evidence of wrongdoing” is an insult to all of us, who have been bombarded by such evidence for years.

Second — another gaping hole in his statement — Congress had a legitimate legislative purpose for requesting the tax returns. The House Ways and Means Committee sought Trump’s returns to determine whether the IRS was fully and appropriately auditing the president.

At issue is the balance of power between the executive and legislative branches. The Trump administration was consistent in its claim that the president was “absolutely immune” from legislative oversight and he even said, “I have an Article II [of the Constitution], where I have the right to do whatever I want as president” — a dangerous doctrine designed to create an autocrat.

In her book, Strongmen: Mussolini to the Present, New York University professor Ruth Ben-Ghiat defines authoritarianism as a political system in which executive power is asserted at the expense of the legislative and judicial branches of government. 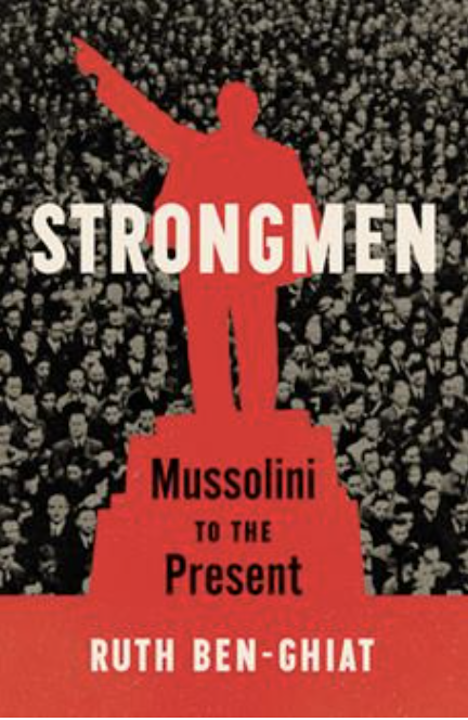 If for no other reason than to limit the power of the executive branch, these records should be furnished to Congress.

The third problem in Fischetti’s “defense” is the idea that Trump is objecting on behalf of “all future presidents.” Rule of law literally means that the law applies to the president as much as it does to anyone. Anything else is autocracy.

The fourth hole is fairly obvious: How is making Trump’s tax returns available to Congress “harassment” — unless Trump has much to hide? He was, after all, the first president to refuse to disclose his taxes. Richard Nixon voluntarily released his returns when media reports suggested that he paid only $792 in federal income tax in 1970 and only $878 in 1971, even though he earned more than $200,000 in each of those years. To allay public concerns, Nixon subsequently released his tax returns for every year between 1969, when he entered office, and 1972.

Every president since Nixon has voluntarily released his tax returns.

On Thursday, Trump’s lawyers filed their motion in court.

Interestingly, it was quite professional and didn’t include any of the outlandish lies that his lawyer had said to the press. His lawyers were perfectly willing to lie to the press, but if they don’t lie to the court, they’re less likely to get into trouble with bar associations. I suggest that those lawyers took more care because of all the sanctioning going on of Trump’s other lawyers. In other words, those sanctions and possible disbarments are serving as a deterrent.

The argument his lawyers presented in court, in a nutshell, was that Super Special Trump shouldn’t have to comply because Big Bad Congress is being really, really mean to him.

I don’t expect that argument to fly.

Basically, it was silly — and if the courts take it seriously, it’s dangerous — but it wasn’t sanctionable. I suggest that the lawyers took more care because of all the sanctioning going on of Trump’s other lawyers.

So while Trump still controls the Republican Party and has managed to raise $100 million since the election, what looms larger is that he has hundreds of millions of dollars coming due, plus a growing pile of legal bills, and a shortage of lawyers willing to work for him. Plus his businesses are on shaky footing right now.

After I tweeted my theory that if American fascism is to be defeated, it will be through a series of small cuts, I was hit with cynicism from left-leaning Twitter. Here’s a sampling: 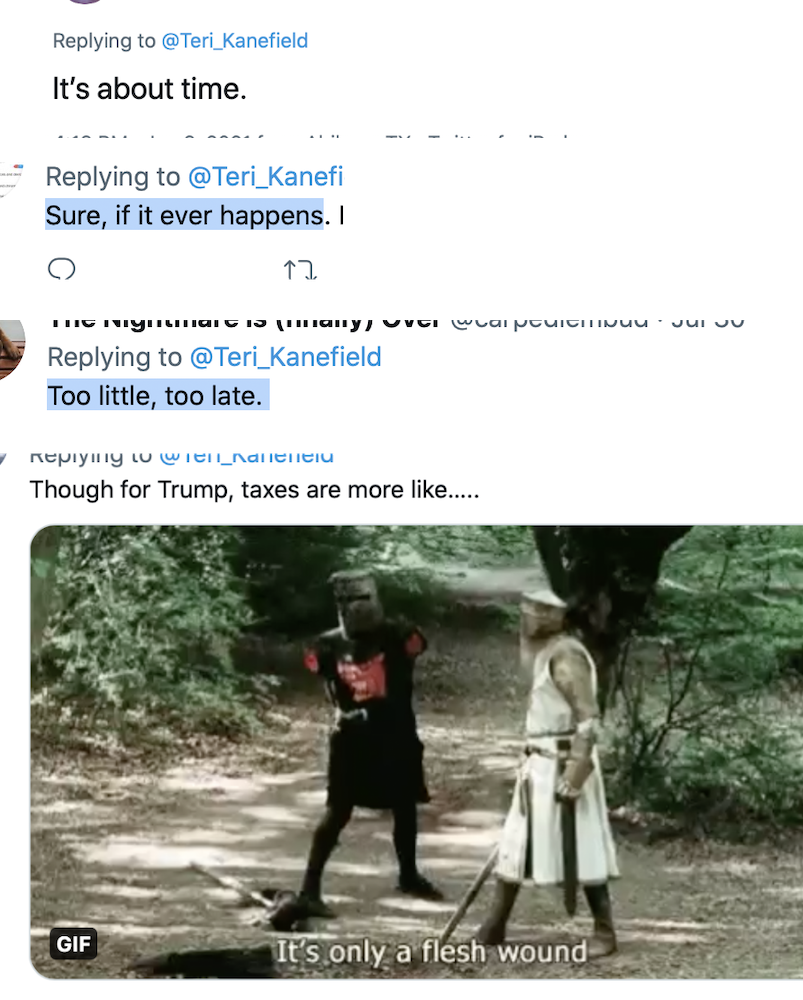 About that last one: Investigations take time. The tapes are not by themselves evidence beyond a reasonable doubt because proving intent is tricky. Due process is a lengthy process. In an autocracy, you can have instant justice. The autocrat says, “The tapes prove it, he’s guilty,” and that’s the end of it. That’s not how it works in a rule of law democracy.

. . . again, as if that’s a magic bullet. It isn’t. See my post on Republican Lawbreaking.

Remember, we’re in a transition. Since 1954, the United States has been (mostly) trying to transition from a representative democracy dominated by white men with institutions that entirely served white men to a true racially diverse democracy — and we’ve been facing fierce backlash.

Given that we are in transition, looking to our history as an excuse to feel pessimistic about a possible future undercuts our ability to make the transition.

There’s a reason the great liberal leaders and trailblazers of the past — the ones who made a real difference — didn’t spread doomsday gloom. They inspired people with possibilities. Martin Luther King, Jr. had a dream.

I’ll go further and suggest that “leaders” who spread messages of doom are not leaders. Leaders take us forward to a better world.

So don’t be cynical. We will only make this transition if enough people feel empowered by possibilities instead of paralyzed by cynicism.

Well, I said a lot of that and got more pushback:

The problem was that Trump was shielded by a major political party, including Republican senators. The failure was in the Republican Party. They chose to shield a lawbreaking president.

Institutions can’t be any better than the people who form them.

After I posted that, the same person responded, saying:

Things went wrong during the Trump presidency at the Senate trial stage.

The Constitution also provides a remedy for Senators who don’t do their jobs and refuse to convict when they should: Vote them out.

The buck stops with the voters.

GIFs and Memes for Hurricane Ian and SCOTUS 2022 Term

This is a two-part blog post. This week, I’ll lay out the

Criminal “Consequences” and the Threat of Right-Wing Extremism

Ordinarily, I like each of these blog posts to stand alone, but

Do You Want to Save Democracy? Create a Twelve-Justice Supreme Court

The U.S. Supreme Court poses a clear and present danger to democracy.

Giuliani’s associate, Lev Parnas, turned a pile of documents over to the