One of the most important factors in the elimination of poverty and the advancement and development of society is giving women the right and ability to control their fertility. What happens when that’s taken away?

In the developing world, the absence of the right and ability to control fertility and manage reproduction not only plays a huge role in overpopulation, it essentially eliminates the contribution of 50% of these societies’ intellectual capital. Many (if not most) of the women are relegated to matriarchal roles in large, unplanned families without any hope or opportunity for education and advancement. 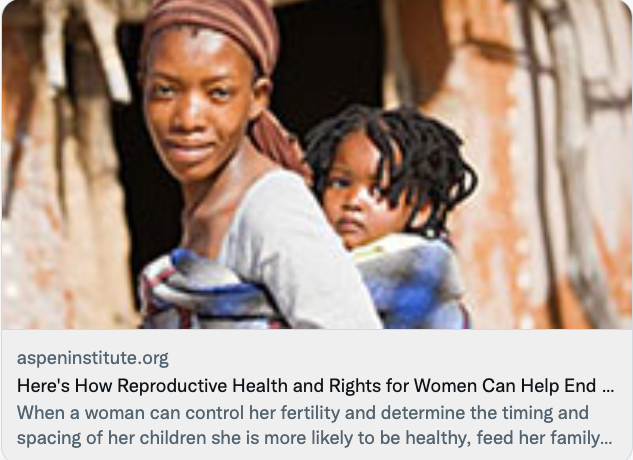 It’s important to note that in his concurring opinion in Dobbs, Justice Clarence Thomas suggested that Griswold v. Connecticut, which held that state laws banning contraception are unconstitutional, should be reviewed and overturned.

Now let’s circle back to the U.S.

Although many factors are involved in the upward mobility and advancement of women, it is not a coincidence that the number of women completing college and attaining advanced degrees has increased considerably since Roe v. Wade was decided.

For 50 years in the U.S., Roe guaranteed access to safe medical procedures, free from legal consequences. Its reversal further will impact the progress that has occurred for women, and the U.S. economy, since 1973.

This begs the question: Why would Republicans, who worship the almighty dollar yet insist on reinstalling a treasonous, sociopathic/narcissistic authoritarian into the presidency because of inflation, willingly facilitate such economic and societal regression?

One of the stated grievances/goals of the America First movement and the “righteous indignation of the working class” is the inability of Americans to “support a family of four on one income.” Implicit in this grievance/goal is the regression of the role of women (back to pre-Roe days).

The Right Loves to Demagogue “Anti-elitism”

One of the effects of banning abortion is that the procedure will essentially go from a universal right for all to a privilege for those who live in a blue state or the “elites” who have the means and resources to travel to a blue state.

As stated above, there are serious economic consequences when women lack the ability or right to manage their fertility. In the post-COVID world, inflation is driven, in part, by supply chain issues, and commerce has been affected by the “great resignation.” It is conceivable that women who can least afford to travel to blue states to have legal abortions will be those in the service industry and in lower-skilled manufacturing jobs, which may result in even greater pressure on already stressed supply chains and already understaffed service industries.

During the 2020 election, Republicans lost a lot of support from white suburban women.

By criminalizing abortion, white suburban woman, as well as women of color who vote Democratic, may lose their right to vote. This is an outcome (objective?) that Republicans would obviously welcome.

If abortion is criminalized, any mother who miscarries will presumably bear the burden of proof that her pregnancy was not terminated illegally but was actually an organic tragedy.

When pregnancies do not result in a birth at the end of nine months, will there be an investigation and trial?

How will doctors, in an attempt to avoid criminal liability, handle records of pregnancies? Will they willingly or by government enforcement turn over records of every pregnancy?

In this scenario, it will essentially be a government mandate/requirement to register a pregnancy for criminal accountability — but not necessarily a gun. Let that sink in …

More than 60% of Americans believe abortion should be legal in all or most cases. And Americans overwhelmingly want gun regulation. Yet, a party with a 7-million-popular-vote deficit nominates anti-precedent, religiously motivated justices to reverse Roe and strike down gun regulation.

Or in other words: “Minority Rule.”

Republicans obsess about the crime problem. Yet their concern about crime doesn’t seem to extend to unwanted (and now illegal-to-abort) pregnancies that end up in foster care … and then prison.

One final thought on the recent report of a 10-year-old rape victim who traveled from Ohio to Indiana to get an abortion. Many on the right would have forced that little girl to carry a rapist’s baby to full term.

Aside from the trauma already experienced by that little girl when she was raped multiple times, imagine the physical toll that a full-term pregnancy would have on the body of a 10-year-old. It would have destroyed her body.

Imagine the psychological and emotional effects that pregnancy hormones would have on a 10-year-old who has already been traumatized by being raped multiple times.

Imagine the disorientation and confusion of a 10-year-old who has been raped multiple times and is trying to understand what is happening to her — and why — as she progresses through a full-term pregnancy.

Imagine the physical, emotional, and psychological effects on a 10-year-old rape victim experiencing childbirth, or more likely, a C-section due to a presumably childlike physical frame.

This is an abominable scenario. And anyone who would force it to occur lacks the judgment and the humanity to be in any position of leadership.

For more of Carmody’s writings on “America First,” click here and here.

This article originally was published on Nick Carmody’s Patreon. It appears here with minor edits.

Nick Carmody, JD, MS-Psychology, has an undergraduate degree in Management of Criminal Justice from Concordia University Wisconsin, a law degree from The University of Illinois Chicago School of Law, and a Masters of Science degree from Tiffin University in Ohio. Nick has a private practice based in Denver, Colorado, and also works with low income children who have experienced trauma (many of whom are currently in foster care).

In 2010, Nick experienced two life-changing Traumatic Brain Injuries (eight months apart). The changes in brain functioning, personality, and emotional processing (along with other intense personal experiences such as childhood sexual abuse, exposure to Cluster B Personality Disorders) created an obsession-like need to understand and confirm these experiences, and served as motivation to go back to school and work in the field of psychology. Nick’s experiences with trauma have shaped a very unique life experience that created an unconventional path to a career helping people who have similar lived-experiences.

Nick writes extensively on https://Twitter.com/Nick_Carmody, and, time permitting, reposts the work as free articles on http://Patreon.com/NickCarmody.

Indivisible Getting to the Finish Line!

Indivisible State Strong Bills Up for an August Vote

In my parents’ lifetimes, interstate travel was restricted and deadly for Black

Who Deserves to Breathe Clean Air?

The smoke has arrived. It is anyone’s guess how many fires we

The Garland Narrative Is Shifting

This week, at least some of the media narrative about Attorney General

Whenever I ask my readers or social media followers what

In my parents’ lifetimes, interstate travel was restricted and deadly