In the first of this two-part series, we look at the popular grassroots volunteer activity of writing postcards to voters to understand its role, use, and impact.

There’s a new type of card joining the ranks of Mother’s Day, holiday, and birthday cards. When an election is coming up, volunteers get together and handwrite postcards to mail to voters asking them to register to vote and providing important candidate and election information. This wildly popular activity started among grassroots activists in 2017 and has been used in every election since. In a time when most people get their information on their phone or computer, is something as low-tech as a handwritten card that arrives in your mailbox an effective way to boost voter turnout?

As a co-founder of Postcards4VA, the first statewide postcard group, I have heard a version of this question since we started writing to Virginia voters in 2017. Because Virginia holds elections every year, activists were able to focus our energy on electing Democrats to the state legislature with the goal of winning a majority in the General Assembly, or as we called it, “flip Virginia blue.” I started Postcards4VA with two friends, Lisa Howard and Krystal Henson. Lisa and I were introduced to postcard writing after the 2017 Women’s March where we wrote to elected officials expressing our concerns. Krystal was part of a postcard writing Facebook community. The three of us decided to coordinate volunteers to write postcards to voters to help bring awareness to Virginia’s upcoming off-year election, which, lacking the draw of a presidential or congressional race, traditionally had low voter participation.

As new activists, as so many of us were in those first days of the resistance, Lisa, Krystal and I wanted to do something that was personal and tangible and that we enjoyed. After a lifetime of sending cards and letters to family and friends (my sister and I had a tradition of sending each other a birthday card every day of our birthday month), I was immediately drawn to writing postcards. Unlike other volunteer activities being presented to help get candidates elected, such as canvassing or phone-banking, writing postcards was something we enjoyed. And with all the political noise out there, we believed postcards that were not mass produced but handwritten with personal notes and signed by a real person was a good way to get our message directly into the hands of voters.

We knew about the diminishing return of direct mail (more commonly called junk mail) but our postcards were different. Though campaigns were focusing on going more digital, our postcards were old school. They had personal messages written in colored markers and decorated with highlighting, drawings, and stickers. Krystal, a graphic designer, made postcard designs we distributed for free that people could print themselves or have professionally printed. Our featured postcard highlighted our rally cry “When We Vote We Win” in big, bold blue font.

Our instructions were simple. Write an upbeat and positive message only you could write. We provided talking points about the candidates and sample messaging ideas such as “Voting is your superpower,” “Your vote is your voice,” and “Democrats who don’t vote elect Republicans.” We charged the volunteers with making the cards colorful and joyful, leaving no doubt they were handmade. We knew that when people put something into their own words, the reader can sense the authenticity of the narrative. Moreover, taking pen to paper is healing; as postcard writer Dinah Wiley says: “Writing in the time of Trump is therapy.”

When we finally mailed our postcards in 2017, Postcards4VA worked with 2,000 volunteers, supported 28 candidates and mailed 137,469 handwritten postcards to likely Democratic voters. Though we did not flip Virginia blue, we did win 15 seats (more than anyone thought possible and just one seat shy of winning a majority in the General Assembly), inspiring the nation and starting the blue wave by winning the governor, lieutenant governor and attorney general races. 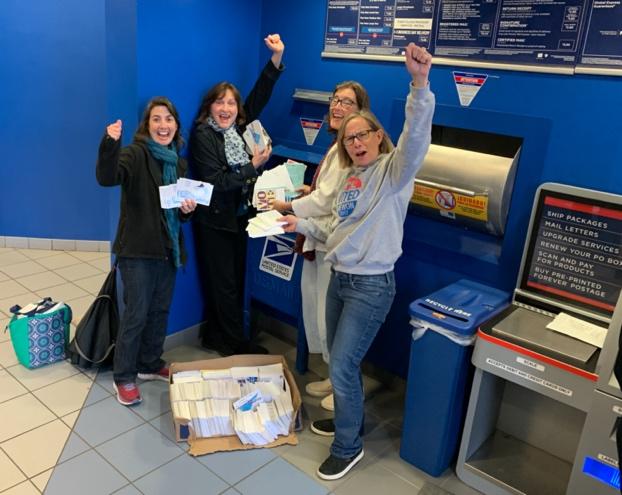 Right after the election, the results of the first quantitative study to look at the effectiveness of handwritten postcards came in. The Women’s Effect Action Fund commissioned a study to see if personal postcards could be used to mobilize women to get out and vote for a family-friendly economy agenda (issues like paid family leave). Postcards4VA writers served as the force behind the 26,000 postcards in this study, and results showed that the postcards increased turnout by 0.4 percent (a typical get-out-the-vote, or GOTV, canvass increases turnout by 0.3 percent) and concluded that the postcards had as good or better effect on voter turnout than going door to door. This was just one early study but it was a start.

Around the same time, Scott Forman, a tech guy from California who had been part of a company that used letters to persuade consumers to reduce energy use, decided to apply the same approach to voter turnout. Forman ran a small random trial study in the 2017 Alabama Senate race and found that voters who received his letter had a turnout rate 3 points higher than those in his control group. These findings inspired him to form the nonprofit Vote Forward to expand the use of letter writing for campaigns and the organization made research integral to everything they did through the Vote Forward labs program.

Another California-based group that studied the efficacy of postcard writing was Sister District. Founded in 2017 to match people living in Democratic areas with competitive state legislative races in red states, Sister District was active in Virginia in 2017 and started conducting postcard research in 2018. Their early studies showed promising but often inconclusive results. Though academic publications tend to only publish strong results, Sister District never cherry coated their findings. By 2020, their research showed that postcards did boost voter turnout.

Postcarding was also popular in the Midwest. Postcards to Swing States got its start with a congressional district primary where they ran a randomized control study and found their postcards increased turnout by 1.2%. After a few more promising results, they took their postcard writing national in 2020, supporting 14 swing states with key Senate races with their retro-inspired, state-specific postcards and ended up sending 15.7 million GOTV postcards.

In addition to examining postcards’ impact on voter turnout, Reclaim Our Vote (ROV), a nonpartisan voter outreach campaign that fights deliberate barriers directed at underrepresented people of color, studied the use of postcards as a way to get people to check their voter registration status. According to Executive Director Andrea Miller, the study showed a 20-25% increase in voters re-registering to vote in the 2019 special election. Even if ROV had not done a formal quantitative study, Miller knew the postcards were having an impact from the calls she was receiving from local election clerks in response to the high volume of people inquiring about their voter registration status.

Even without the quantitative study results we saw from the very beginning, our postcards were being noticed and saved. Canvassers often tell us that when they knock on doors, people will ask “Did you send me this postcard?”

By 2018, not only were volunteers and candidates being shown the postcards when they were out canvassing, but postcard writers who volunteered on Election Day at the polls saw people come in with postcards in hand. Abigail Spanberger (CD-7), a first-time candidate for Congress in 2018, told us how when she was at the polls “People would hold up their postcards and show it to me.” And Elaine Luria who also ran for Congress in 2018 commented, “It really is a personal touch. People would tell me how they noticed the handwritten note in their mailbox.”

By 2019, candidates were asking us to write postcards for their campaigns. They had heard how much voters enjoyed them. Moreover, the state party was no longer merely tolerating our efforts. They were helping to spread the word and telling candidates to contact us for postcards.

Because of the high volunteer enthusiasm for writing postcards, we are able to write for all candidates who want postcards, even candidates in red districts with little chance of winning. We see these postcards as “planting blue seeds” across Virginia. Angela Lynn, who ran for delegate in 2017 told us, “You helped increase voter turnout by 9% in my rural areas. Voters told me they loved the postcards, a personal touch asking them to vote.”

When the pandemic stopped all face-to-face campaigning for the 2020 presidential election, postcards became one of the dominant ways volunteers could connect with voters. Qasim Rashid, candidate for Congress in 2020, recounted an exchange on social media about his postcards. A potential voter actually didn’t trust Rashid “because he is getting so many people to write postcards for him.” Fortunately, someone else responded, “But doesn’t that mean you should trust him because it shows people care enough about him that they are randomly writing to you?”

The longest-running postcarding operation is Postcards to Voters, who generously helped us when we first got started. Postcards to Voters measure their success by the campaigns they have worked on over the years. As they write on their website: “Our results speak volumes for the close contests, hard-fought victories, and occasional landslides.”

After four years of research and field experience, we now know what volunteers suspected from the very beginning. A handwritten postcard arriving in the mail makes it through the messaging clutter and is noticed. The resulting increase to voter turnout may be small but still significant, especially in tight races or elections with low voter turnout such as primaries, off-year elections, or special elections, where the outcome can be decided by just a handful of votes. Even in deep red areas, it’s always better for us to speak for the Democrats than let the Republicans do it.

Robbin Warner is the cofounder of Postcards4VA. Since it started in 2017, Postcards4VA has helped volunteers write almost 1.5 million postcards for Democratic candidates in Virginia. Robbin is a producer of the weekly Zoom show, Friday Power Lunch, which amplifies the voices of the Virginia grassroots. She is also a founding organizer of Network NOVA’s annual Women’s Summit.

Before turning her attention to activism full time, Robbin taught writing at the university level for 25 years. She holds a Ph.D. in Folklore and American studies and wrote her dissertation on the rise of the environmental justice movement in the 1980s.

From 2009-2012 Robbin was part of the executive board of the NATO Charity Bazaar Foundation in Brussels, Belgium that raises millions of Euros for small charities tied to NATO countries.

Robbin lives in the Del Ray neighborhood of Alexandria with her husband Gene and four white cats, who love making unannounced guest appearances whenever Robbin is on Zoom.

CCDP: Are You Eligible to Vote Next Week?

How We Win Season Two is Here!

BLACK OWNED MEDIA MATTERS Who gets to tell the story matters. Minority

Follow the money corrupting American politics with these free apps

Actions we can take on Medicare and Social Security, help for railroad

Move fast to convert outrage into action and supporters

Actions we can take on the Jobs Act, Medicare overpayments,

BLACK OWNED MEDIA MATTERS Who gets to tell the story