Sri Preston Kulkarni may have been blessed with good fortune, but his success can also be attributed to a lot of hard work. Kulkarni was born in Louisiana and moved to Houston with his family as a small child. He comes from immigrants on both sides of his family. His father was an Indian immigrant and his mother a native Texan who descends from Sam Houston. “I tell people the first immigrant in my family wasn’t my dad. It was Sam Houston, because he came here from Mexico,” Kulkarni said in March.

After high school, Kulkarni began studying at the University of Texas, but when his father was diagnosed with leukemia, Kulkarni dropped out of school to help care for his dad. After his father passed away, Kulkarni worked multiple jobs to help his mom and three younger siblings, who were almost bankrupted by medical bills. Despite this adversity, he still graduated from the University of Texas with honors. His father’s illness and his family’s difficulties have made quality, affordable healthcare for all Americans one of the priorities of his campaign.

After college, Kulkarni got his first taste of working for the U.S. government when he earned a fellowship to serve as a defense, foreign policy, and veterans’ affairs advisor in the U.S. Senate. He earned a Master’s Degree in Public Administration from Harvard and then joined the Foreign Service and worked overseas for more than 14 years to keep the United States secure and promote peace around the world.

But then Donald Trump became president. Kulkarni had long been concerned about the divisions in the United States. (In graduate school, he began an initiative to reduce partisan hostility.) But it was the white supremacist rallies in Charlottesville that convinced him he needed to run for office. He resigned from the Foreign Service and came back to the U.S to, in his own words, “stand up for the America that my parents raised me to believe in.”

In 2018, he ran for Congress in Texas District 22, which is one of the most diverse districts in the country. Kulkarni lost that race to the incumbent, but he stands a good chance of winning this year. He would be the first Hindu and Indian-American to serve as a congressperson from Texas and he certainly will be more representative of the diverse nature of the district. Kulkarni’s website proudly declares, “We represent all the faiths of District 22 and are campaigning in 21 different languages, reflecting the diversity and strength of this community.” Sri Kulkarni’s win in Texas District 22 will represent the diversity of the district is running in one of

In addition to prioritizing health care, Kulkarni takes strong stances on gun violence, crime, and injustice. “Growing up, I was no stranger to gun violence — I witnessed it personally and my neighbors were victims of it,” he says. “Gun violence tears whole communities apart.” He also wants to reform police departments to bring back trust and ensure the safety of everyone in the community.

The coronavirus pandemic has made a big difference in how Kulkarni is running his 2020 campaign. While the Republican Texas leadership has been reluctant to put any restrictions in place to fight the virus, Kulkarni’s campaign cares about the safety of the community. To that end, he has held numerous virtual town halls and organized and participated in food drives and PPE collection. Because he believes in following the guidance of scientists, the campaign “suspended all in-person events and now does everything virtually—phone banks, interacting with voters, wellness checks, town halls, a virtual campaign academy, and more.” 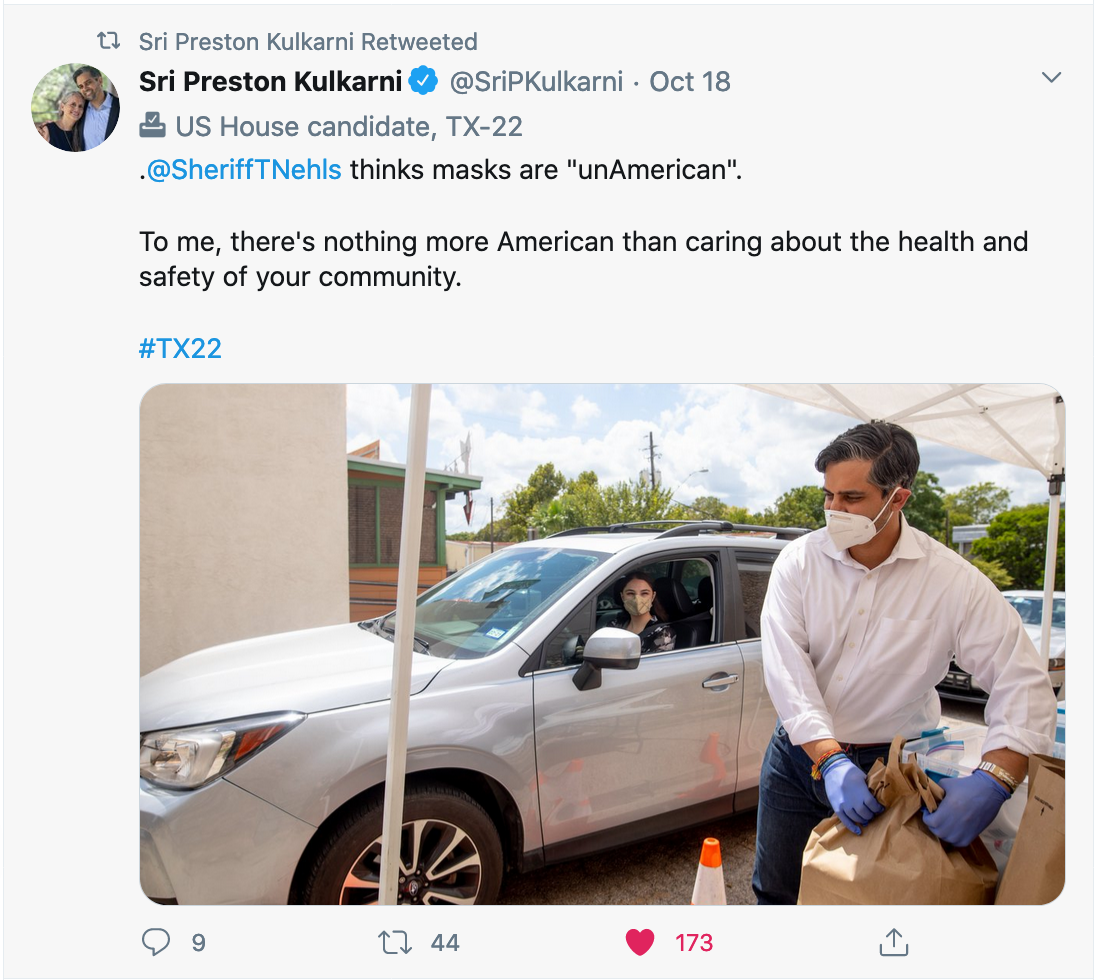 It is clear that Sri Preston Kulkarni wants to share the good fortune promised by his name with everyone in his state, his community and his country. He is the very definition of a patriot, and Texas’ 22nd congressional district would be well served by electing Kulkarni to Congress.

Mindy Schwartz is a blogger, life-long political activist, wife, daughter, dogmom, DemCast USA Content Director and Jew. She is equally proud of all of those roles.

Indivisible Getting to the Finish Line!

In my parents’ lifetimes, interstate travel was restricted and deadly for Black

Who Deserves to Breathe Clean Air?

The smoke has arrived. It is anyone’s guess how many fires we

The Garland Narrative Is Shifting

This week, at least some of the media narrative about Attorney General