Supporting the national and state parties vs. supporting a grassroots organization isn’t an either-or question. It’s important that we have strong Democratic organizations such as the DNC, DCCC and DSCC — which is why we fundraise for these organizations on a year-round basis. But the grassroots perspective on endorsements, strategy and communication is every bit as critical.

At Democrats Work For America we utilize a “grassroots up” strategy when assessing candidates. Our district analysis and candidate assessments depend on local input from grassroots activists who are familiar with their communities. This information is incorporated into a multi-layered assessment process to determine the candidate most likely to win their seat and/or build a winning bench.

Sometimes the best candidate is clear at both the party leadership level and the grassroots level. Sometimes it isn’t. The following is a selection of case studies where our grassroots perspective and analysis led us to different conclusions than party leadership.

We had real reservations about Jeff Van Drew based on his voting records in the New Jersey state legislature — particularly his votes on gun control. Despite his strong, political bona fides, his communication did not indicate strong support for the Democratic party platform. We endorsed Tanzie Youngblood, a teacher with strong credibility. The DCCC’s Red to Blue program supported Van Drew, who, of course, won the primary. As is our usual policy, we supported Van Drew for the general. He won, but became a turncoat, switching to the Republican Party and voting against impeachment in defiance of his own party when he had no real political pressure to do so.

We wanted North Carolina to have a greater ability to bring the Democratic base to the race in a year in which the presidential election was also at stake. We chose Erica Smith. The early establishment support of Cunningham frustrated Black North Carolinian Democrats. It also drove Smith further left, to the point that her viability as a future candidate has been negatively affected because of her railing against Democratic leadership. While Cunningham’s sexting scandal was an unforced error no one could have foreseen, this whole race was problematic from the beginning.

The California Democratic Party (CA Dems) and the local establishment supported Dave Min. Our extensive assessment found Katie Porter to be an extraordinarily effective communicator and highly credible on financial issues. She had a good combination of endorsements, a warm persona and a relatable personal story — a dynamic combination of policy chops, communication skills and personality. She has more than met our expectations.

You’ll notice a few California races among these cases. California has a jungle primary, which means that the top two vote getters advance to the general, regardless of party. This kind or primary adds another layer of complexity. In the case of CA-25, the state party supported Bryan Carorio, who was too far left of the district. In 2016, he had lost the general election in the district when Hillary Clinton won it. We endorsed Katie Hill, who placed in the primary and was able to flip the seat by nearly 10 percentage points.

Sara Jacobs is an example of a multi-cycle strategy. Despite her youth and affluent background, she had a record of complex policy work including focusing on international abuse of women and child trafficking. We strategically supported her in 2018 in CA-49, reinforcing her immediate support of Mike Levin upon her loss. Then, we endorsed her for CA-53 (a bluer district) in 2020. She won the seat in a solid run-off race and has been garnering positive attention. Another example of a multi-cycle approach is Kathy Manning in NC-06; she lost in 2018 but was well positioned for a win in 2020 after redistricting.

Assessing for early support is complex and risky. We have to trust in our process, even when other candidates are propped up or become a sweetheart of the progressive left as was the case with Laura Moser. Fletcher’s moderate policy stance and effective communication style had the best chance against the Republican in the general, as shown with Fletcher’s win over a nine-term incumbent.

The establishment did not think this was a winnable race. Brindisi had an exceptional reputation of bipartisan work in the state legislature and NY-22 is a very bipartisan district. He won in 2018, and only narrowly lost to Claudia Tenney in 2020 due to her debate performance in which she falsely claimed to have written and passed bipartisan legislation.

Overall, the candidates we assess as winnable and support before the primary outperform candidates we don’t endorse until the general election. These victories show that our model of assessment + early support + targeted grassroots action does result in winning more seats. 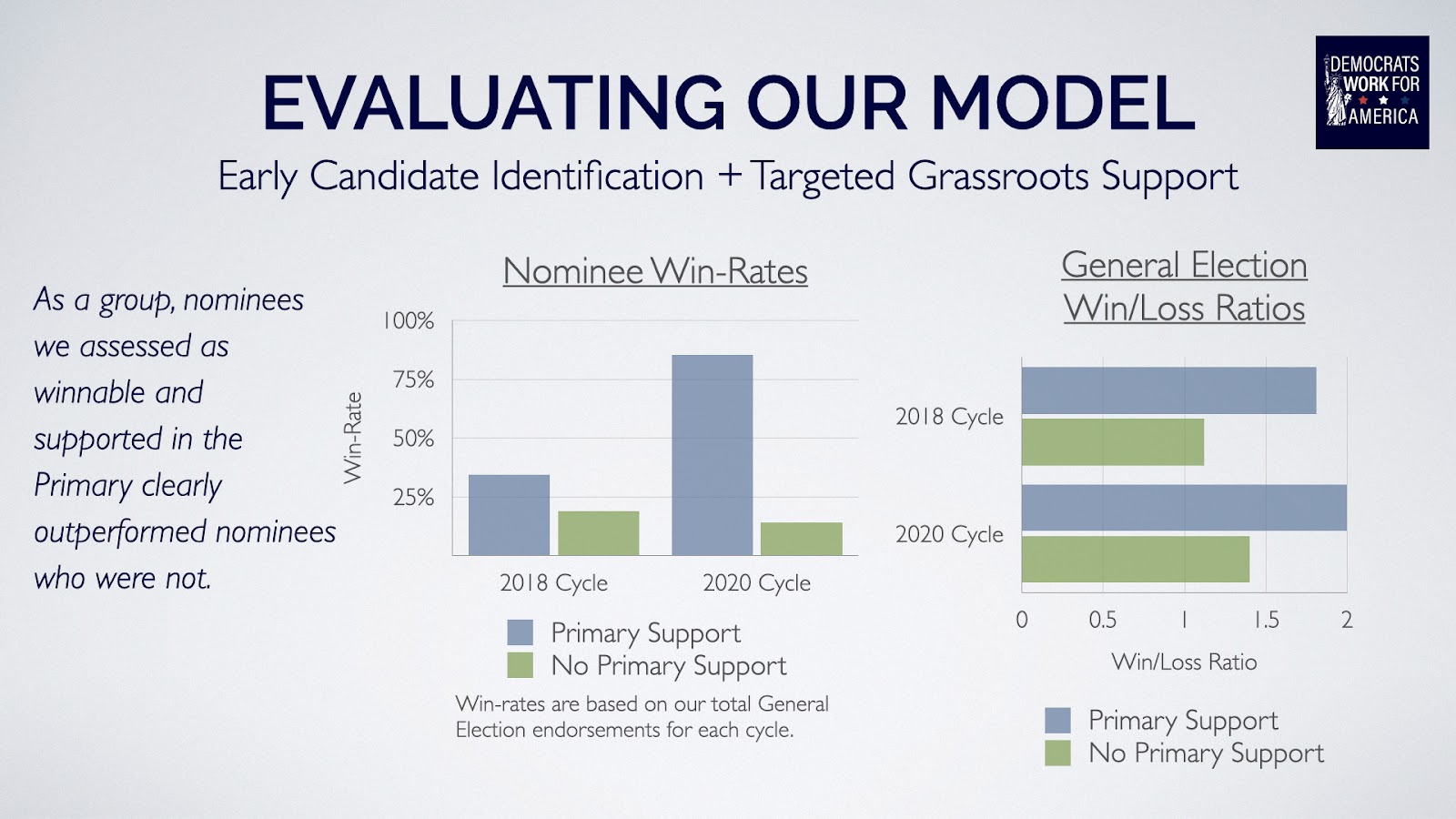 In our first two cycles, we have won 305 primaries, 327 seats and assessed over 700 races. Learn more about our model, past endorsements and results on our website.

Please consider helping us continue this important work by making a donation here!

Winning 2022: Elect a Senate Majority Who Will Stand Up Democracy and Fight for Biden’s Agenda

Have You Got Two Seconds to Save Democracy?

Can you feel the energy?  That’s the Democrats on the ground getting