President Joe Biden is actively working to reform Immigration and Customs Enforcement. This follows on the heels of multiple scandals during the Trump administration that included separating families, placing children in cages and widespread abuse allegations.

Thanks to whistleblowers like nurse Dawn Wooten, Americans have learned horrifying details about ICE abuses.

In September of 2020, Wooten filed a whistleblower complaint with the Department of Homeland Security Inspector General alleging medical neglect. She charged that mass hysterectomies were being performed on detainees in a Georgia facility. (Counteraccusations have been made against Wooten but have not been substantiated.)

Wooten stated in her complaint: “Everybody’s uterus cannot be that bad” and continued, “Hispanics are treated the worst in the facility.” Wooten’s facility is operated by LaSalle Corrections, a private for-profit prison company.

Nurse Wooten is being represented by the Government Accountability Project. Wooten’s allegation is backed up by other people in the facility and signed by multiple immigrant advocacy groups including Project South, Georgia Detention Watch, Georgia Latino Alliance for Human Rights and South Georgia Immigrant Support Network. Numerous women who were held in the detention center have also alleged they were abused with unnecessary, unsanctioned gynecological surgeries. House Democrats are investigating the allegations.

Wooten referred to one doctor as “The Uterus Collector.” She continued, “Everybody he sees has a hysterectomy — just about everybody.”

Nurse Wooten’s information follows on the heels of numerous rape complaints at multiple ICE facilities. In a filing obtained by The Texas Tribune and ProPublica in late 2020, guards allegedly assaulted women being held in an El Paso detention center. The guards reportedly knew where the security cameras were placed and attacked women in areas where they would not be caught on camera.

According to federal data obtained by the advocacy group Freedom for Immigrants, ICE reported 1,224 formal accusations of sexual assault between 2010 and late 2017. Only 43 cases were ever investigated. Some even worry that female detainees have been forced to have hysterectomies to prevent proof of rape in the form of pregnancy.

While the congressional inquiry into the Georgia detention center is still ongoing, the Biden administration is working to overhaul ICE. Biden has implemented new rules to limit the agency’s power and to restore human decency. According to The Washington Post, ICE agents will focus “on national security threats, recent border crossers, and people completing prison and jail terms for aggravated felony convictions.” 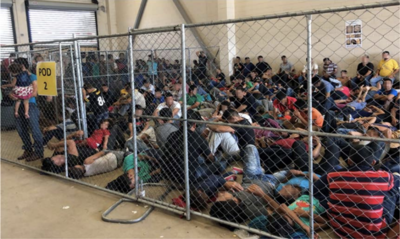 Biden also moved quickly to establish a task force whose mission is to reunite hundreds of families separated under Trump’s inhumane policy of separating children from their parents. As of this writing, the task force has found the parents of 112 separated children.

According to White House.gov, President Biden’s strategy is “centered on the basic premise that our country is safer, stronger, and more prosperous with a fair, safe and orderly immigration system that welcomes immigrants, keeps families together, and allows people—both newly arrived immigrants and people who have lived here for generations—to more fully contribute to our country.”

President Biden is working to restore faith in our immigration system and our damaged international reputation. It’s time to end for-profit ICE and prison centers.

Photo from By Department of Homeland Security Office of the Inspector General – https://www.oig.dhs.gov/sites/default/files/assets/2019-07/OIG-19-51-Jul19_.pdf, Public Domain, https://commons.wikimedia.org/w/index.php?curid=80122430

Jessica de la Davies is a Member of Society of Professional Journalists, Producer The Nutcracker on PBS, Twice Published Author and serves as Special Ambassador for the American Diabetes Society.

Reverend Warnock fights to cap insulin costs. Which Georgia counties have the most diabetics?

Reverend Warnock fights to cap insulin costs. Which Georgia counties have the

Friends, TOMORROW, Team Warnock is hosting a Million Dials Day of Action. With one week

Republicans criminalize women’s freedom of speech A mother prosecuted for