Like most people who know of Alex Jones, I have tried to ignore him as yet another narcissistic right-wing, conspiracy-theory clown profiting off the most gullible or irredeemable right-wingers America has to offer. How refreshing it is that Jones (an avatar of fake news) is finally being more publicly exposed in court as another shameless, fraudulent egomaniac, willing to say and do anything to make money off anyone’s worst fears or most traumatic pain.

Now that Jones is finally being held accountable with the first of many multimillion-dollar judgements for the poisonous lies and toxic conspiracies he has relentlessly injected into American life, it is worth putting his inevitable fall through a psychological lens: Who is this Alex Jones character? What is he really about? What kind of human is not bound by any form of shame, guilt, truth or reality. What kind of human is willing to profit off the worst pain of other Americans as a business model?

What finally caught up with him was his nearly 10 years of despicable lies. He repeatedly insisted that at least some of the 26 people murdered in 2012’s shooting at Sandy Hook Elementary by an AR-15-wielding young man — 20 of whom were six- and seven-year-olds —  and their grieving parents were “crisis actors.” He said the shooting was staged so “all gun owners” were “collectively blamed.” His whole routine has been to profit off far-right conspiracy theories, but attacking innocent murdered children and their forever-grieving parents was obviously indefensible for anyone who possesses the slightest bit of humanity.

As with Sandy Hook, Jones declares or strongly implies nearly every mass shooting or violent attack is another “hoax” put on by “the Deep State” of the U.S. government or “leftists.” The goal is to create enough public outrage to empower the government to ban assault weapons and eventually take away all other guns, which is a ridiculous premise in light of the Second Amendment of our Constitution.

It is hard not to suspect Jones is being paid to follow the NRA Republican playbook of denial, doubt and fear with some extra conspiracy thrown in. The NRA could not pay someone to do more than what Jones does for them. He regularly creates alternate realities that highly benefit the NRA, Republicans and racist gun owners by throwing doubt that any mass shootings by white men with assault rifles ever happened. This is societal gaslighting, folks!

Here are just a few examples of Jones’ gaslighting: The Boston Bombing was a DHS drill, Congresswoman Gabbie Giffords getting shot in Arizona was a government mind control operation, and the Sutherland Springs Church shooting was a fake Antifa false-flag staged operation.

Certainly many people think he believes what he says and dismiss him as potentially psychotic or someone with paranoid personality disorder. Most politically aware people dismiss him as a con man, a carnival barker, who is completely shameless in profiting off the bigotry and ignorance of others.

Whatever his true motivations, by claiming government functions and tragedies are sinister conspiracies, Jones has groomed his audience into becoming gullible, gaslit consumers of his brand of ignorance and racism. He then directs his cult to financially support him by buying the mostly worthless and overvalued products in his online store, so clearly making millions is part of his incentive to poison America’s well of trust and goodwill.

Until this first major financial judgment against him, he has always been able to deflect and escape any responsibility for the poison he spews by demonizing “the mainstream media,” government and anyone who is not far right. He also claims that he was “just asking questions” and “we’ve asked questions on both sides” and “we reported on other people saying that” even though it has been shown repeatedly that Jones usually had the only large platform voicing these claims. He turns major events into far-right conspiracies to poison American discourse and civil society. This is who Jones is and what he has been all about.

However, if you dig deeper, there is much more. While most of the negative labels about him are accurate, they are virtually all subsets of a seemingly obvious underlying psychologically disordered mind. Indeed, a court psychologist revealed in Jones’ divorce proceedings that he was diagnosed with narcissistic personality disorder (NPD). NPD is an answer to, “What kind of human is not bound by any form of shame, guilt, truth or reality, and is willing to profit off the worst pain of other Americans?”

What too many people struggle to fully process is the bottomless depth of selfishness and cruelty in most pathological narcissists like Jones. By definition, they are usually bullies who effortlessly spread toxic lies about people, places and things. Sadly, the police, courts and law are also often equally ignorant of these implications. So much so that even after the reveal of Jones’ NPD diagnosis in family court, the judge still gave him shared custody, apparently having limited knowledge that pathological narcissists almost exclusively use their children as their groomed minions against ex-spouses to appear “normal.”

This is the teachable moment Jones is now providing us. It all becomes clear when you realize that most people with NPD are much like Jones. They crave attention, adoration and possessions of status to try and fill an emotionally empty, insecure hole inside themselves, but they never succeed. This hole triggers the lying, the shamelessness, the lack of human compassion, and the lack of conscience, and all of it contributes to their ability to so easily con people into trusting them and giving them money. Manipulating clearly comes easy for those who have been telling stories to hide their true nature and/or trauma their entire lives.

Compulsively, narcissist Alex Jones grooms his audience into becoming his flying monkeys for the bigotry and ignorance he promotes and sells in his online store. It is almost irrelevant if he believes what he says or not. It’s all part of his NPD compulsions, and why people like him will never stop poisoning the well of American society if left unchecked. 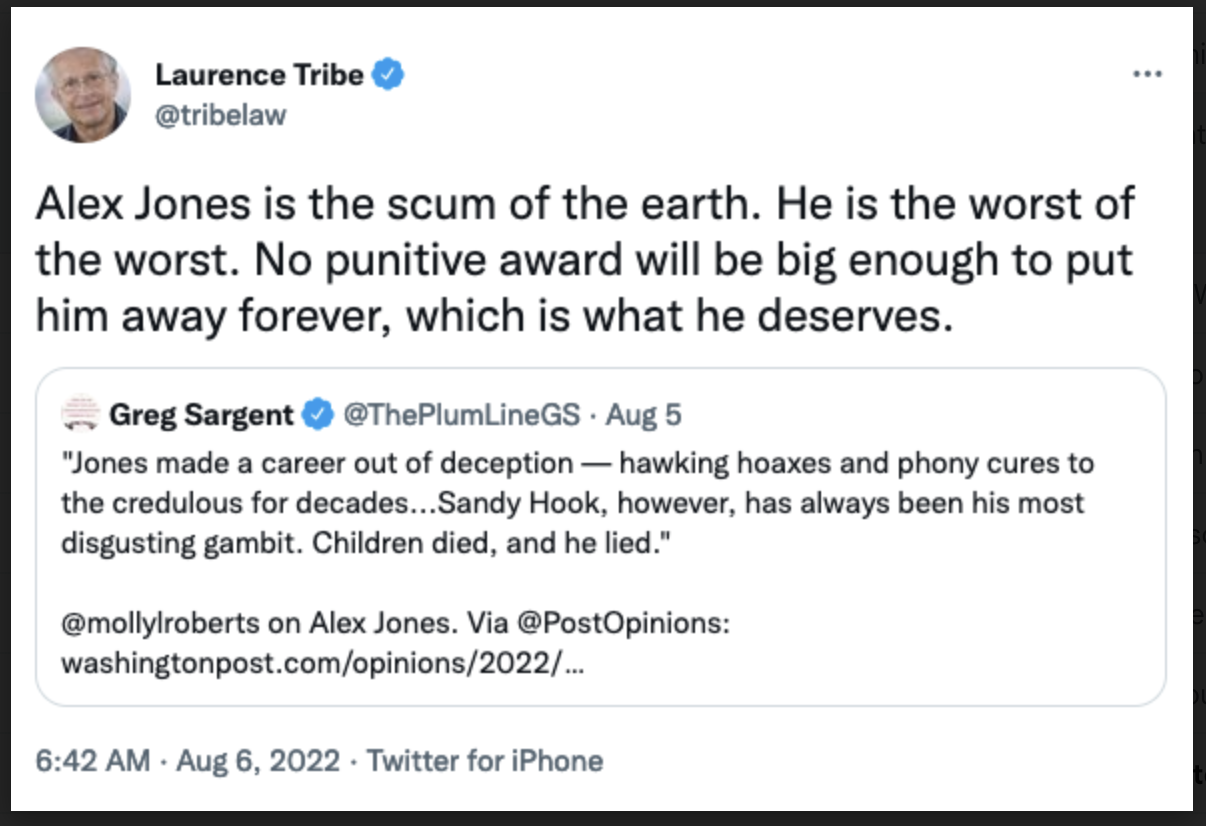 Sadly, Prof. Lawrence Tribe exhibits how well pathological narcissists are still hidden in plain sight in society, because Jones is not unique or even the worst. Recent estimates suggest that NPD could make up as much as 6.2% of the population. Jones, with a huge platform to spew his for-profit narcissistic abuse, is just one of the most famous.

Ideally, it should be obvious to everyone that people like Alex Jones are not the slightest bit unique as toxic narcissists, but the word narcissist itself too often goes in one ear and out the other as “someone with too much ego.”

This means that not only is Jones a useful NPD example on an individual level, his behaviors are tells for every other “media” figure, politician and predatory businessperson who lacks morals and scruples and has the ability to shamelessly lie and trick people into believing in alternate realities.

Think of Alex Jones as the avatar for narcissistic personality disorder and narcissistic abuse. Sure, he’s a louder, more obvious version of NPD, but that is the point. He is a definition and example most people can remember. So the next time you come across a selfish, alternate-reality based politician, or any other human being, you will remember that person likely has NPD or is high on the pathological narcissist spectrum like Jones and will know to expect the highly predictable narcissistic abuse if they do not get their way.

The Republican Party itself has become the party of conspiracy theories and pathological narcissism because they can no longer sell the truth to get elected. It’s speculated that if they dumped the Big Liar, they might improve, but sadly the Republicans and the conservative movement already had entered a post-truth phase well before trump. Now the party seems to be run by Alex Jones–type pathological narcissists and worse. Too much? Few if any Republicans have condemned Jones for calling Sandy Hook “staged.”

Pathological narcissists by their very nature are deceivers. First and foremost, they deceive themselves into believing they are perfect because their fragile egos cannot handle anything less. This ability to delude themselves is why they are so good at deceiving others. False conviction in an alternate reality is clearly remarkably convincing.

In the past, Jones’ lawyers tried to help him appear normal by calling him a performance artist, which is ironically true since all pathological narcissists are always putting on an act to hide their true selves. Their main defense mechanism is projecting their faults onto others. So when Jones calls everyone in his conspiracies “crisis actors,” he is unconsciously admitting what he really is himself: someone who has repeatedly acted as though his completely false conspiracies are real and who will manufacture a crisis out of anything for profit and advantage. Therefore, if you take away one thing from Alex Jones’ consistently toxic and shameless behavior as a so-called media personality, it’s that he and others like him are the real crisis actors involved in the real conspiracies against America.

Abused and Pregnant at Thirteen

Sam is an international strategist, writer and traveler. He grew up in the multicultural SF Bay Area with a liberal teacher mother and conservative stockbroker father, which gave him a natural desire to bridge cultural and political differences. In the 2000s, Sam recognized a friend needed rescuing from a bully, so he studied bullying psychology. He later discovered he had accidentally become an expert in the psychology of narcissists, sociopaths and psychopaths when others kept asking for help. Sam went on to write his dream book explaining America.

*Hear him discuss narcissism on the Backwards & In High Heels podcast: tinyurl.com/37mv8cwu

MONDAY: School Boards and the Rise of Extremism Virtual Panel

Statement on Murder of Tyre Nichols

Republicans payback their billionaire donors with your money

How To Win Friends And Influence Supreme Court Justices