Now let’s talk about Republican lawbreaking. What we’re calling Republican corruption wasn’t illegal in the 1920s. There were really no laws against fixing prices and manipulating markets. There were very few (if any) consumer protections. People got rich from cheating, just like now. The difference is that it was legal then, and that’s a big difference. It was also perfectly legal to literally prevent Black people from voting.

A related theme from Heather Cox Richardson’s books is that democracy is always in danger of slipping toward oligarchy. This is because when people accumulate wealth they tend to use their wealth to consolidate power to benefit themselves. Not all people who get wealthy do this, but enough slave owners used their wealth to consolidate their own power and create laws to solidify their position at the top of the hierarchy. Robber barons and business tycoons in the late 19th century did the same.

For the past number of years, we’ve been slipping into our third oligarchy. Look what happened to income inequality since Reagan took office: 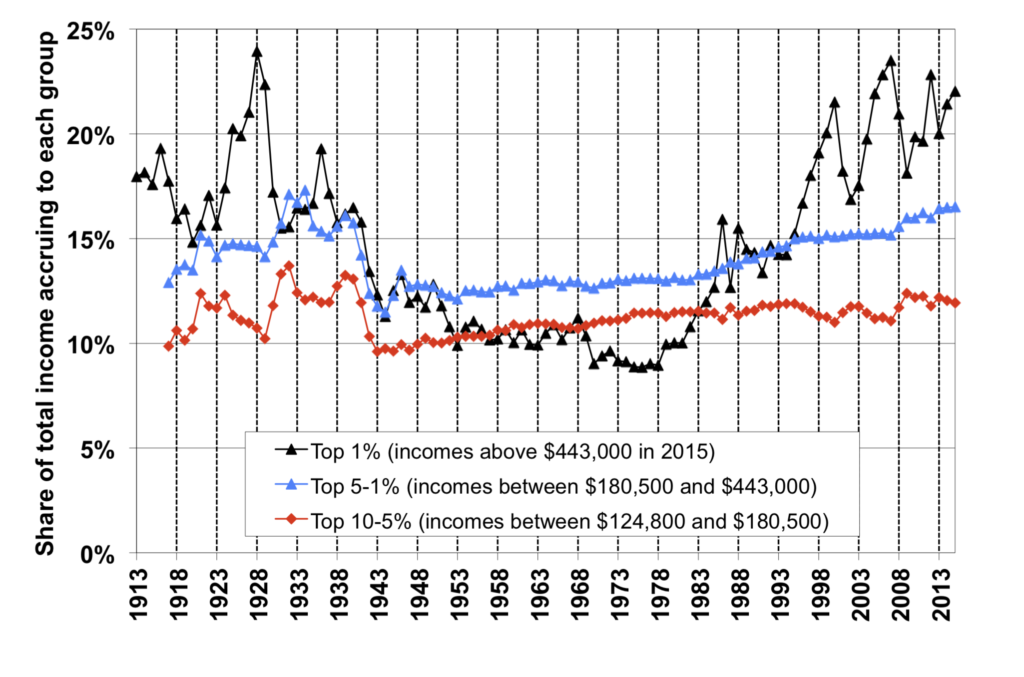 Income inequality is approaching the levels we had in the 1920s. Now people who have accumulated wealth are once again trying to consolidate their power. That’s what many of them do. If we see what’s happening as part of a 250-year struggle instead of something new and different that has suddenly sprung up, we can approach the problem differently.

This question was specifically about the spread of lies:

Trying to build an oligarchy based on lies isn’t new. Our past oligarchies were also based on lies. White supremacy was a lie. The idea that if you got rich you deserved unlimited power was also a lie. Yes, the methods of disseminating lies are new and improved. Lies traveled slower back then, but so did information.

Here’s another reason people feel despair and panic. If you came of age during or after the civil rights movement, you may have a progressive view of history, which goes like this: The founders started with some pretty good ideas. The idea of a government based on rule of law instead of the whim of a king. The idea of an independent judiciary.The idea that all “men” are created equal.

These were good ideas. The problem was that the founders left out a lot of people.

The progressive view of American history is that as we’ve moved forward we have expanded who is included in the “we the people,” and as we did so, we’ve moved closer to the founding ideals and closer to a more perfect union.

This is often taught in schools or thought of as if it’s inevitable, as if liberal heroes of the past fought and won the battle. Some people started feeling as if we’re in a boat and we don’t even have to paddle. The wave of history and what is right and good will carry us forward to a better, more inclusive tomorrow.

According to this view, all was going well, and then, over the past 50 or so years, the Republican Party went off the rails and here we are.

There’s an opposing view of American history, the reactionary or regressive view, which goes like this: When America was young it was a place of wide-open opportunity. There was almost no federal government. There were almost no regulations. People (well, white men) could do what they wanted. Then government grew and began encroaching on their freedom. The same regulations that we see as creating fairness, they see as an unconstitutional infringement on their liberty. According to that view, America is on a downward slope.

In fact, I think the graph looks more like this:

There is a constant push and pull. Progressives push forward and reactionaries push back. Yes, the arc of history bends toward greater justice, but only with great effort, and much more slowly than we’d like, and with a frustrating amount of pushback.

If you think history is an upward slope, you’re going to feel shocked and paralyzed when suddenly the slope stops moving upward or starts moving down.

The further you get into an oligarchy, the harder it is to get out — but remember, we got out of one oligarchy through legislation (the New Deal and civil rights legislation). And there has been pushback ever since.

Another question I often see is this one:

I suggest that this question comes partly from unrealistic expectations or the idea that once and for all the progressives will win the battle and the forces trying to create an oligarchy will be defeated. This will never happen. Every bit of progress will trigger a backlash. In fact, I think the closer we get to a functioning diverse democracy, the more desperate the pushback will grow.

One way for rapid change is to win elections with large majorities. That’s how Franklin D. Roosevelt was able to enact the New Deal. But there was still enormous and very frustrating pushback from the Supreme Court. Looking back to the 1930s, the progress seems rapid, but it actually took years with lots of frustrating pushback.

I also think the question can also arise from frustration at the slow working of democracy, but that’s another talk.

Now, finally to answer the question: “Can the U.S. create and maintain a multiracial democracy?” The answer is: “It depends.” The future isn’t predetermined. The future takes its shape based (mostly) on what people do now. From any point, there are many possible ways forward.

I therefore can make no absolute predictions about the future. But when you understand that the future takes its shape based on what happens now, you don’t feel so helpless. History offers perspective and teaches us possibilities.

​​ Since the beginning of the world economic reopening this year, we’ve

Trump Tried to Seize Power by Staging a Coup

A recent article in Fast Company, “Why People Believe False Information and

I’m not sure there are elections more important in 2022

Kyrsten Sinema and Joe Manchin are not serious people, certainly