It’s been a busy and exciting month for Democrats in Coconino County.

First, the Biden Administration took one of our LD-7 House representatives, Arlando Teller, and then our longtime County Supervisor Liz Archuleta. We wish them both well and know that our losses are gains for the country. Arlando Teller has been replaced by Jasmine Blackwater-Nygren, a graduate of Stanford University and ASU Law School, who hails from Apache County. LD-7 includes rural areas near Flagstaff stretching to Page as well as much of Navajo and Apache Counties

Liz Archuleta’s departure kicked off a swell of interest in the District 2 seat which Archuleta has occupied for 24 years. After receiving 12 applications, and conducting public interviews of the candidates, the Board of Supervisors selected Jeronimo Vasquez to serve until the General Election in 2022.

Meanwhile, within the party, our committees have been hard at work. The Executive Committee has drafted a 2-year strategic plan (final approval coming soon) and is working on a budget to support that plan. County Party members will receive reports on this work at our March Quarterly Business Meeting on March 13. The strategy includes outreach to voters and non-voters alike and engagement with minority and youth voters.

The Platform Committee, led by Marie Sansone, has brought together over a score of contributors and will be prepared to present its work in June. One goal is to articulate how the principles of the National Party Platform apply locally.

Our LatinX Voter Committee meets weekly and has produced two informative Facebook Live events — one on COVID and one on property rights. You can view these on Facebook @LatinxCoconinoDems. Thank you to Co-Chair Sarah Benetar for finding such valuable guests and for conducting the interviews.  Likewise, our Indigenous Voter Committee is meeting regularly with a score of new members. We are engaging with Navajo and Apache counties and the Arizona Democratic Party to continue the successes we had in 2020 measured by increased voter turnout.

Our Legislative Committee’s monitoring of the craziness in the Arizona Legislature is drawing followers statewide. Here’s one comment: 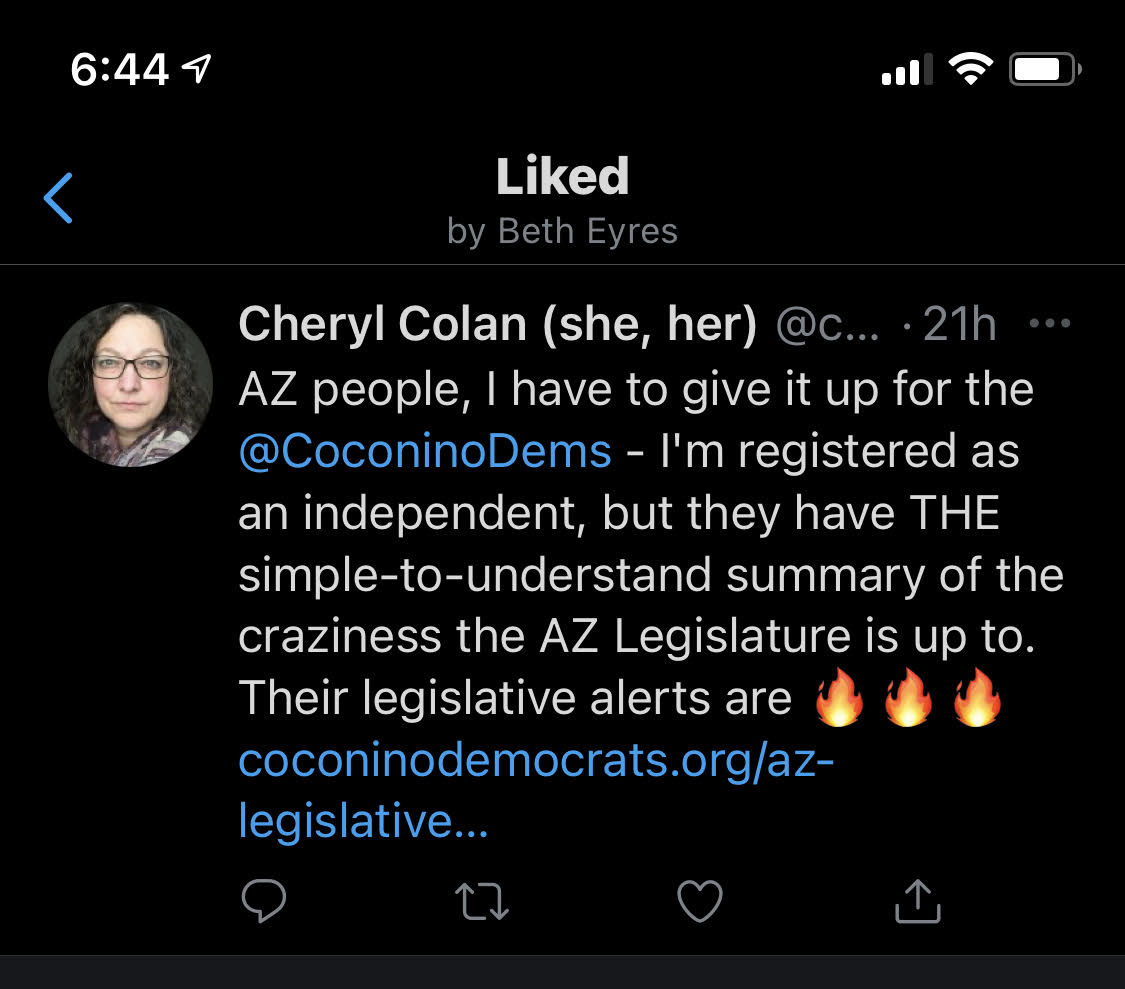 Sadly, our LD6 legislators are among the craziest at the Capitol. Senator Wendy Rogers (aka Wing Nut Wendy) is spending her time (and ours) mourning “the former guy” and sponsoring bills like one that would remove traffic cameras. Meanwhile, Rep. Walt Blackman‘s major bill of the session would require prison time for both women and their doctors involved in abortion, and Rep. Brenda Barton, who returned for her 5th term, simply joins in the bills. All three of them, of course, join in every voter suppression bill the other Republicans sponsor as well as bills to strip public schools of funding. Our Legislative Committee is making a list and checking it twice so we don’t have to research all of this come election time next year. Meanwhile, LD7 Senator Jamescita Peshlakai is actually getting things done (not as much as needed given Republican resistance) and leading the voices who are speaking out against racism in the GOP.

We also have two volunteers closely monitoring the Independent Redistricting Commission and, in coordination with ADP, we are poised to lobby when the time comes to draw maps. Citizen comment has already had an impact on procedures the Commission established for meetings going forward.

Not the least busy by far is our Roosevelt-Kennedy Fundraising Committee led by Aubrey Sonderegger and including Nancy Branham, Ann Johnson, Sallie Kladnik, Mary McKell, John Propster, and  Ellen Wade. Look for exciting announcements, including an invitation in your snail mail, over the next few weeks.

Read our thoughts on the controversy in the Senate about including this key piece of the American Rescue Plan:

Why the Minimum Wage Hike Belongs in the COVID Relief Bill

And, refresh yourself on the essential elements of the plan:

We hope the Senate comes back from this week’s recess and gets down to work to get this relief passed into law.

County Parties are the grassroots of the Democratic Party.
We have ambitious plans and we’re hard at work on them but we can’t do it without your help.

Here’s How to Reach Your Ex Com Members

Our President has the authority to protect people from white supremacist terrorism.

We work to protect the American Worker, the American Dream and the Future of our Children. The Mission of the County Party is to elect Democrats to public office who embrace the values of the Democratic Party.

The Postmaster General Is Unconstitutional

Reminder! Zoom Call with Senator Schatz, This Friday at Noon

Election Edition 2November 2, 2022 General Election Status As I write this,

Our President has the authority to protect people from white supremacist terrorism.

From the editors: Tuesday evening, 5/24.  As we are writing