While the country is raging against racism, the newspaper’s editor called a local reader well-known for his racist views to say he is a “good man.”

As people protest against racist police violence and impunity in at least 140 cities across the country, Bucks County Courier Times’ editor took time to speak at length with a man who believes “the white race is in the midst of a genocide against white people” and that it’s a “myth that all races are about equal in intelligence” to express regret that he removed him from a community reader advisory panel.

In a blog post titled “Why I Took My Data Down,” which apparently Bill O’Neill forgot to take down, he wrote:

“The editor of a local newspaper who has since been given even greater responsibility decided to remove me from the editorial board after appointing me because of the clamor from idiots who were part of a great concentration of similiar (sic) idiots.”

In all transparency, I was the “idiot” who helped start the clamor in January 2019 after the announcement, though I had a lot of community support.

“The editor reconsidered his opinion and called me ‘a good man,’” O’Neill wrote. “He didn’t do that lightly. He interviewed me over many hours. He reviewed my background, accomplishments and achievements along with some mistakes and mis-fires and drew his un-solicited (sic) conclusion.”

The editor of the suburban Philadelphia newspaper, Shane Fitzgerald, who as O’Neill pointed out “has since been given even greater responsibility” (Fitzgerald is now Gannett’s Pennsylvania editor for the USA Today Network in charge of 14 PA newspapers and one in New Jersey) removed him after public pressure and media outlets from Levittown to Philadelphia tried to chase him down for comment, though unfortunately he successfully evaded and stonewalled them, avoiding any scrutiny as to how this could have happened. But that didn’t stop Fitzgerald from printing ONeill’s letters to the editor or even a guest column after the fact, with one in particular catching my eye entitled “Trump’s no racist and neither is the GOP.” I mean who better to judge whether Trump is a racist than someone who believes in segregation, who questions Alexandria Ocasio Cortez’s intelligence because she is Puerto Rican, and that Blacks have low IQs and pursue sports because supposedly they don’t have to use their brains so much. He even suggested Michelle Obama wouldn’t have gotten into Princeton had she had been required to take a written test. I could go on, but I think you get the picture.

But apparently he’s “a good man.” And maybe the suggestion to take down his “data,” which I am assuming means his racist blog posts, was a wink and a nod by Fitzgerald signifying: do this, and you’ll be on next year’s panel.

But what led Fitzgerald to this unsolicited olive branch?

Gannet’s Fitzgerald did this after the national office demanded that he respond to an email I sent to them inquiring about whether they had professional standards for their employees use of social media. I was specifically inquiring about Bucks County Courier Times far right columnist JD Mullane.

Now the examples I provided of Mullane trolling Matthew Yglesias and Lt. Governor John Fetterman were nowhere near Mullane’s worst, or most offensive tweets. They really are just a testament to his doltishness and lack of professionalism.

Fitzgerald responded tersely: “We addressed this several days ago. The tweets have been removed.”
But when I brought up to Fitzgerald, since he was cleaning up Mullane’s Twitter feed, that one of his slightly older, Islamophobic tweets was still up he did nothing. It was, as I wrote in my email, “a racist and Islamophobic comment to fellow Bucks County Courier Times columnist Dom Giordano that ‘The Squad’ of Congresswomen of color (Alexandria Ocasio-Cortez of New York, Ilhan Omar of Minnesota, Ayanna Pressley of Massachusetts, and Rashida Tlaib of Michigan) should be nicknamed the ‘Jihad Squad.'”

Now this isn’t some one-off, deplorable, Islamophobic comment for Mullane. In the December 13 podcast Listen Up with Phil and JD: Katherine Drexel has left the building, Mullane went into more depth about what he thinks of Islam. In the podcast he tells his colleague Phil Gianficaro, who is kind of like Alan Colmes to JD’s Sean Hannity, that “Pope Francis hates America.”

“Last September 11 he made sure to pose with Imams, four or five Imams, saying that they were spreading world peace. I mean that was a thumb in the eye to America, you know,” said an audibly chafed Mullane. “So he doesn’t like us.”

So according to Mullane, Islam is not a religion of peace and the entire religion should be blamed for the 9/11 attacks on the U.S.

Here are a few more Islamophobic tweets by Mullane:

Mullane doesn’t stop at Islam with his backwards views. His politics of nostalgia (for the 1950s) and resentment can be clearly seen in his thoughts about women (and subsequently the diminishment of patriarchy), who he thinks should be wives first. In addition to Islam being a threat to Western Civilization, he also see feminism as a similar menace. 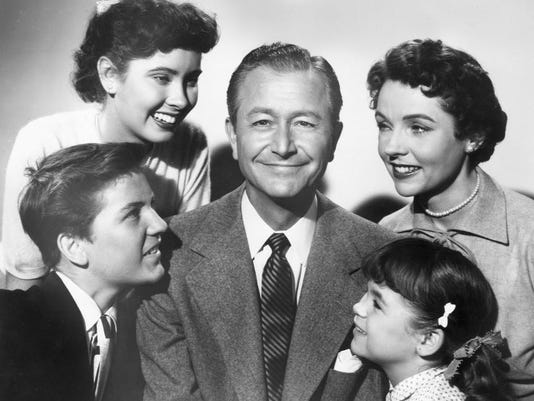 In his column, “Endangered: The ‘Classy Dame’ and the ‘Father Who Knows Best,’” Mullane writes that in his perfect, more civilized world of yesteryear, a “wife has the option of staying home with the kids, so she is not constantly stressed.” Apparently, women are fragile creatures, unlike men, and should avoid being working parents lest they become overwhelmed.

As for the man of the house:

The Father Who Knows Best. He’s a species of male (Latin: “Maximus breadwinneris”) generally associated with the 1950s and who ruled suburbia through the 1970s.

The Father Who Knows Best ran things: his business, his company’s home office, his house. He took charge, made decisions, and provided love and stability for his wife and children, who knew he loved them and how hard he worked to provide for them … Post-1960 feminism decided that he embodied “the patriarchy,” and that his replacement should be a meeker man of softer emotions (Latin: “Wussis henpeckedoris”).

For Mullane, if the Classy Dame, who aspired to emulate Audrey Hepburn, Grace Kelly and Jackie Kennedy “in manner and dress,” and the Father Who Knows Best “vanished, [it] really would hurt us, maybe bring down Western Civilization.”

Mullane has also written that feminism is responsible for mass shootings in his column “Fathers may be the best cure to mass shooting culture.” According to the Levittown-based Gannett columnist, Third Wave feminists never considered “if their ‘toxic femininity’ plays a role in diminishing men, creating the broken boys who grow into broken gun-wielding psychopaths.”

To top it off Mullane has also compared #MeToo to McCarthyism.

So it should come as no surprise to readers that Mullane, with his anti-Muslim, misogynistic, right-wing nationalism and western chauvinism, would pal around with a bunch of Proud Boys at a rally supporting Republican Congressman Brian Fitzpatrick. In his article “Storm Warning for Election 2020,” the Bucks County Courier Times columnist writes:

Across the lot at the pro-Trump counterprotest, I was introduced to several young members of the nationalist Proud Boys.

“Oh, you guys are the white supremacists, right?” I said.

He doesn’t definitively identify them as an extremist group, like the FBI classifies them, or a “hate group,” as the Southern Poverty Law Center designates them based on the group’s many views that are similar to JD’s: anti-muslim, western chauvinist, mysogynistic. Instead, he lobs them a softball to refute charges that they are white supremacist, without any follow-up, and gifts them with the cloak of anonymity. As a result, we will never know if the Zach Mullane spoke with who was there to support Republican Congressman Fiztpatrick is Zach Rehl, president of the Philadelphia Proud Boys, which would really add quite a bit of context to the character of these Congressman Fitzpatrick supporters. 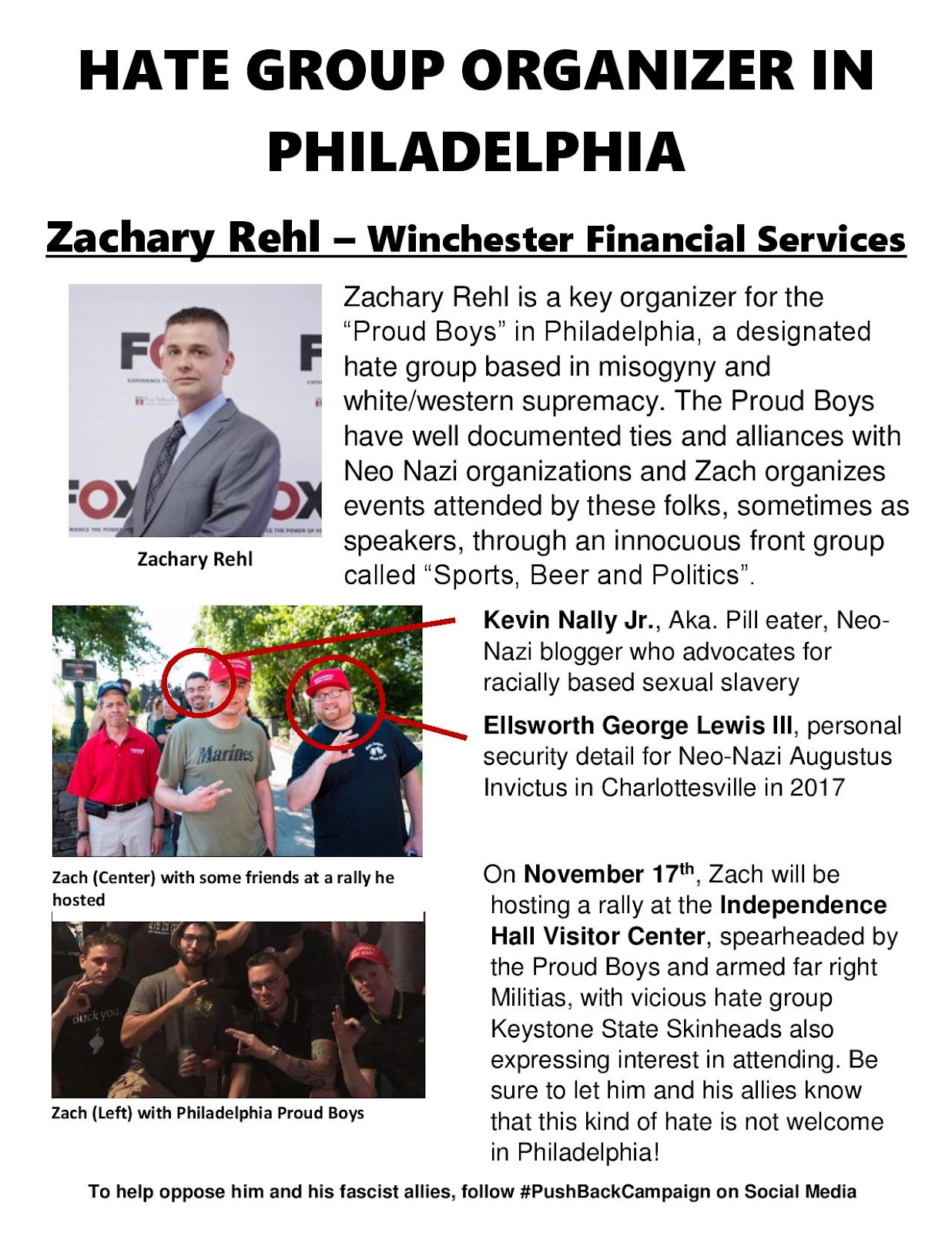 This brings us back to Bucks County Courier Times executive editor Shane Fitzgerald. I don’t blame Bill O’Neill. He is, I guess at least you could say, forthright and transparent with his opinions as a private citizen — as abhorrent as they are. And Mullane, with his doltishness and backwardness (and now newfound coronavirus trutherism), it’s not even his fault he is in a position to share his political opinions without any real discretion or oversight, even if they are ignorant, bigoted, or filled with lies.

The buck must stop with Gannett’s Pennsylvania editor Shane Fitzgerald.

But in the end, Gatehouse Media/Gannett/the USA Today Network is ultimately responsible for deciding if Fitzgerald’s reign of error is in fact that, or if how he’s running Gannett’s newspapers actually aligns with their own corporate and journalistic values.

They have to ask themselves: Does hate have a home at the Bucks County Courier Times, or the 14 other newspapers Fitzgerald is in charge of?

Check out the recent #OHSen headlines

On Refraining from Violence

Kyrsten Sinema and Joe Manchin are not serious people, certainly not serious

So much for starting the new year off on the right foot.

Why My Republican Friends Remain Dead to Me…

I’m not a New Year’s resolution kind of guy. When I make

Have You Got Two Seconds to Save Democracy?

Can you feel the energy?  That’s the Democrats on the ground getting

Describe the Jan 6th insurrection and election sabotage clearly with