Today, the focus is Nevada, where we’ll have another caucus (hopefully more successful than the last one) and get one step closer to our eventual Democratic nominee for President. While all the pundits talk about Nevada’s role in the presidential race, we want to talk about what makes Nevada’s current state legislature unique: women.

But what’s even more important than hitting this milestone is how it has affected the types of bills introduced and debated during the 2019 legislative session. Nevada’s legislature has been controlled by Democrats since 2009 (with the exception of the 2015 and 2016 legislative sessions when both chambers were controlled by Republicans). Many issues at the top of the priority list for the 2019 session reflected the broader priorities of the Democratic Party: expanding economic opportunity and access to health care, investing in education and affordable housing, and implementing criminal justice reform. But certain bills specifically reflected the priorities of the majority-female legislature, including strengthening domestic violence penalties, passing pay equity legislation, creating permanent funding for rape kit testing, establishing a sexual assault survivor bill of rights, and studying the causes of maternal mortality, to name just a few.

Nationwide, as the below chart by the Washington Post shows, women have a long way to go to gain parity in the majority of state legislatures. Women make up more than 40% of lawmakers in only three other states: Oregon, Washington, and Colorado. 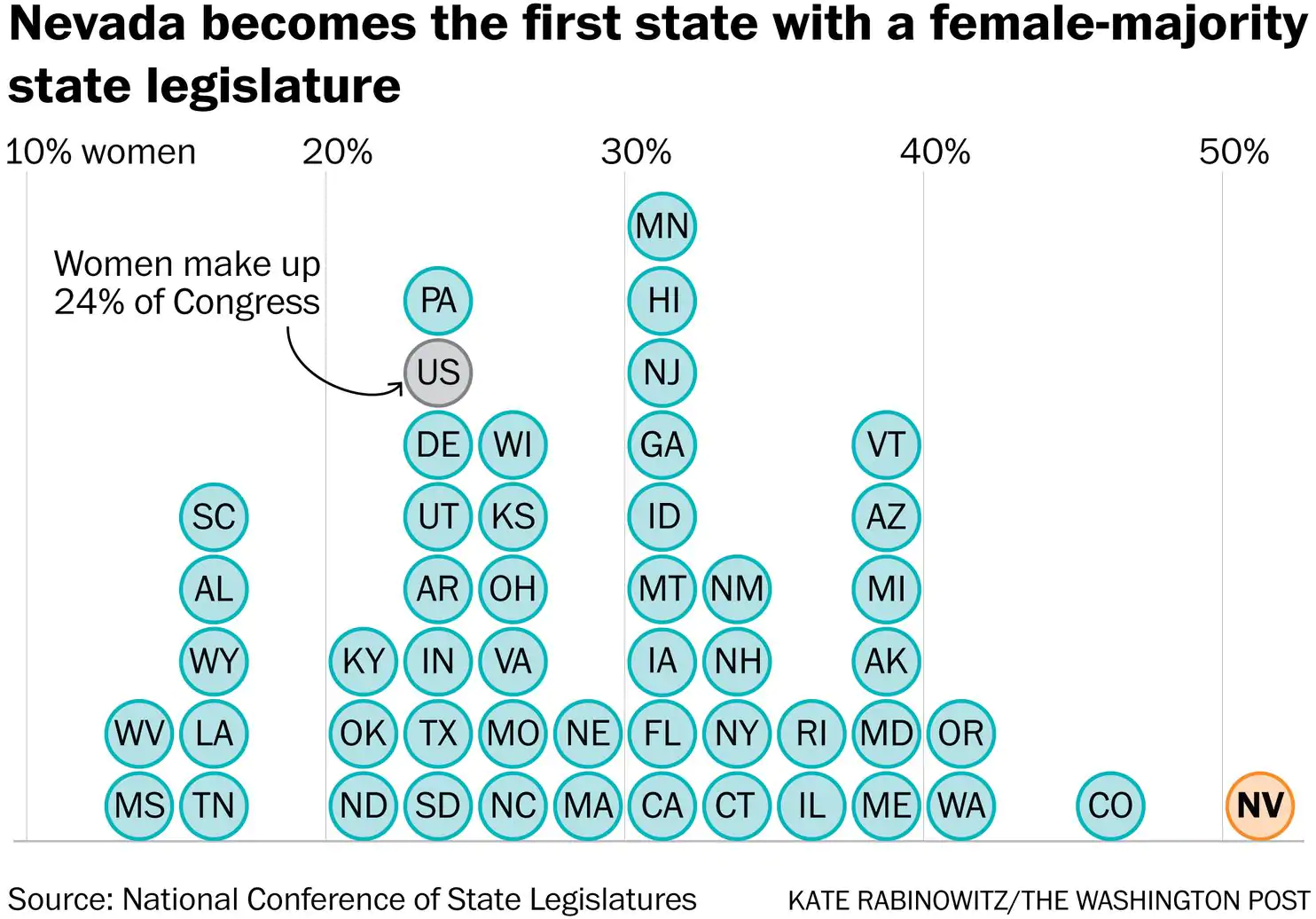 For the past quarter century, women have made slow progress in representation in state legislative chambers. 1992 became known as the “Year of the Woman” for the number of women elected to Congress, but it was also an important year for women in state legislatures, where they passed the 20% benchmark. It would take until 2017 – the year of Virginia’s historic legislative elections where Democrats gained 15 seats – for women to cross the 25% benchmark. The 2018 elections saw the largest one-year jump ever for representation by women, from just more than 25% to nearly 29%.

EveryDistrict has been proud to play our part in this increase. Since 2017, we’ve endorsed 100 state legislative candidates in seven states running to flip districts from red to blue, and 48 of our candidates have won. Sixty-one of our 100 candidates have been women, and they’ve flipped 32 of our 48 wins (67%). Of our winning women, 25 have replaced male legislators (78%), while only one of our winning men defeated a female candidate (in all other matchups both candidates were men).

At EveryDistrict our mission is simple: we help flip state legislative districts from red to blue. But our work is about so much more than whether there’s a D or an R next to a state legislator’s name. It’s about electing a new wave of lawmakers who are committed to enacting progressive policymaking in their state capitals and committed to delivering the best outcomes for their community. Nowhere is our impact more evident than in Virginia, where as we recapped last week, the new Democratic majority is moving quickly to implement a slew of progressive priorities on everything from voting rights to the minimum wage to women’s health care and gun safety.

In 2020, we have a huge opportunity to make change in the states and make what we’re seeing happen in Virginia (and Nevada) happen in states across the country. As we gear up to make even more endorsements soon, you can make a down payment to help flip critical districts from red to blue by supporting our work. Make a donation here.

Making Abortion Political Endangers the Lives of Women and Children

At EveryDistrict, we believe that Democrats can run competitive campaigns in every district at every level. We aim to reverse the losses of recent years by helping more Democrats in more places run for office.

Updates from the Campaign Trail here in Ohio

A Force for Freedom

Utah GOP undermining the will of the voters. Again.

A Force for Freedom

By Lisa DiRado Have conversations about abortion care. Use this guide to

Fix Medicaid. Don’t kill it. Nothing hurts like a toothache – except

Ukraine’s fight for democracy has a lesson for Democrats

Making Abortion Political Endangers the Lives of Women and Children

During the U.S. Supreme Court oral argument for Dobbs v.

HARRISBURG, PA– Today marks the third week of the PA