The Illinois Supreme Court matters. For one thing, it can determine what happens with abortion access and reproductive rights. Join Jane’s Army online next week – Tuesday, August 30th – for this important virtual event.

From Jane’s Army and co-sponsors, including Indivisible Chicago Alliance:Tune in to hear from two candidates for the IL Supreme Court and organizers from Jane’s Army to learn more about what the stakes are this November, why we need to elect these two progressive candidates, and how you can plug into the work.

What: You Be the Judge: Meet Two IL Supreme Court Candidates (an online event)
When: Tuesday August 30th, 6:30-7:30 pm
Info: See the Facebook Event page
Sign up: To get the link to the event, sign up here.

Writing to Voters – Summer & Fall
When voters receive handwritten envelopes and letters, they’re more likely to actually get out and vote. That’s why Indivisible Chicago-South Side has been working this summer on Vote Forward campaigns to get out the vote in key districts in Illinois and in battleground states across the country.

A big thank-you to all who came out to write on one, two, three, or four of our dates this summer. Shout-out to folks who’ve donated stamps, beverages, or cash or joined Vote Forward themselves and have been downloading their own letters.

Special thanks to Vote Forward expert writer and our mentor, Steve Kagan, who shares welcome advice and encouragement. He has also been using his own resources to print letters for us and to provide envelopes and stamps. Steve is our inspiration!

Last week we set a record with 15 letter writers, who penned 250 letters. Enjoy these photo highlights:

Mark your calendar: Our next letter-writing dates will be Thursdays, September 15 & 29. Once again, we’ll meet on the Nile patio, new time: 6:00-8:30 pm. Watch for the sign-up link in upcoming newsletters.

Steve K recommends writing letters while watching football. Not a sports fan? Write letters while viewing your fave TV entertainment or while sipping wine or tea with a friend.

Do letters make a difference? YES.

Handwritten letters encourage people to get out and vote. And in many districts, a few votes can sway an election. Vote Forward is a leader in letter-writing campaigns. Want evidence? Read about the impact of Vote Forward letter campaigns here & here.

This year, winning Congressional seats in Illinois is key to holding the House for the next two years. In her 4 years in Congress, Rep. Lauren Underwood has been an incredibly effective advocate for progressive issues, especially health care and Black women’s maternal health. But, after redistricting, Illinois’s 14th District is made up of 70% new territory. Many are Democrats not used to voting in midterm elections.

Congresswoman Underwood says talking one on one to Democratic voters is vital – if they know her, they’ll vote for her

Over the weekend, 5 IC-South Siders joined more than 20 other activists with ICA to knock doors for Rep. Underwood in Joliet. Special guest canvasser was Delia Ramirez, Democratic candidate for Congress in Illinois’s new 3rd district. 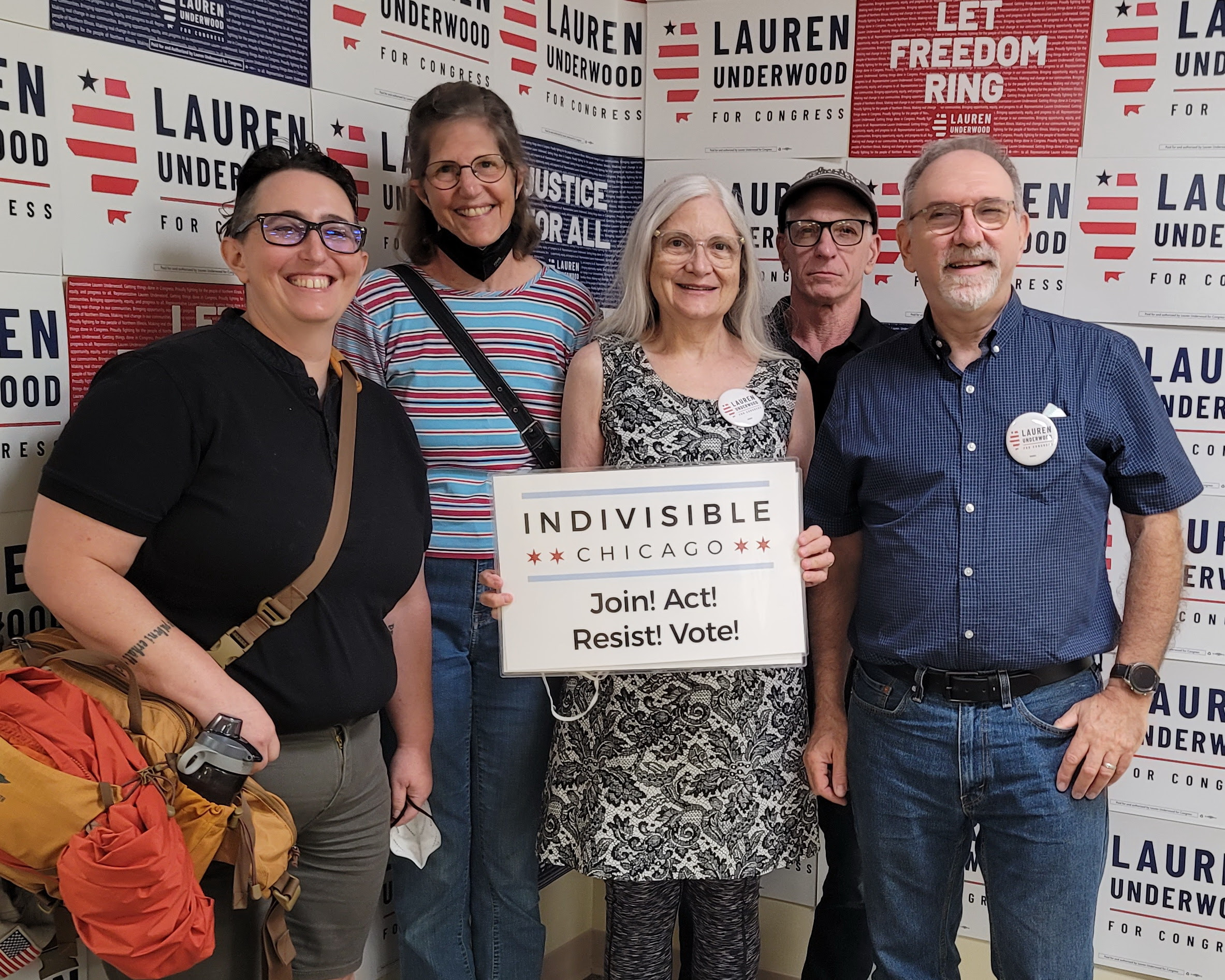 Lauren Underwood addressed the roomful of volunteers. She told us that the biggest threat to her re-election is voters not knowing her. The most important thing we volunteers can do is help Democratic voters in this new part of the district learn who she is so they’ll want to get out and vote — for her!

We had an uplifting Saturday afternoon going door to door in Joliet neighborhoods — so many people we spoke to had never heard of Lauren Underwood but said they’d vote for her after we told them about her. Canvassing makes all the difference. Thanks, volunteers!

You can also help Lauren Underwood win in 2022 by joining the Indivisible Chicago Alliance’s weekly phone banks. We’re dialing for Lauren every Tuesday from 6-8 pm from now until the election.

What do you need in order to phonebank from home? A laptop, a phone, and a comfy place to sit. You connect with phonebank leaders on Zoom, where you get all the training and support you need before – and during – the two-hour session. In the last 15 minutes, you get to debrief and share phonebank stories with the other callers.

To get the Zoom link to join one or more Tuesday evening phonebanks for Lauren Underwood, RSVP here.

Get Active in Vital Campaigns Across the USA

Indivisible Chicago-South Side shares opportunities to make a difference in key Illinois districts and in other battleground states. Join the efforts!

Make a Difference in Georgia: Phone from Chicago

From Georgia Dems: We are excited to “Keep Our Dem Senate”’ with Reverend Warnock and elect Stacey Abrams as Governor! You’re invited with front-row seats.

From now until our big win in November we will have phone bank events that welcome amazing volunteers and special groups across the U.S.

ACT: Phone Georgia voters from your home to help turn out the vote for Georgia’s critical elections. Many dates, times to choose from. Sign up here.

ACT: Volunteer in person … or from your own home:

Indivisible Chicago-South Side shares information and action announcements from other organizations on issues important in our country, state, city, and communities.

Advocate for the War Divestment Resolution – with Sue Avila

Join IC-South Side member Sue Avila in advocating for a resolution in the Chicago City Council to divest Chicago from war. 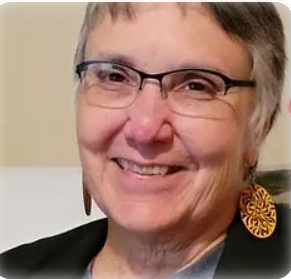 Sue writes: Chicago is currently investing taxpayer dollars in the War Machine through its pension funds, which have millions invested in weapons manufacturers and military contractors.

These investments prop up violence and militarism at home. A Chicago Tribune analysis published August 19, 2020, found that Illinois law enforcement agencies received $4.7 million worth of surplus military equipment including several armored vehicles and assault rifles in a two-year period starting in 2017.

Sue continues: A group of us are working to pass a Resolution in the Chicago City Council to divest Chicago from war. Currently the divestment resolution, R2021-1305, has 9 co-sponsors including Ald. Jeanette Taylor (20th Ward). The resolution was moved last March to the Finance Committee.  Ald. Leslie Hairston (5th Ward) is Co-Chair of that committee. We need your help getting the Finance Committee on board.

ACT: A group of us are organizing to meet with Ald. Hairston in the coming weeks to urge her to support the war divestment resolution. If you are interested in joining the effort, please contact Susan Avila at avila.susan@gmail.com.

CAARPR writes:Join us this coming Tuesday, August 23rd, at 6 PM on the corner of Randolph and Clark St. to DEMAND the immediate full implementation of the ECPS ordinance.

The Interim Community Commission for Public Safety and Accountability has yet to be appointed, and this shows the necessity to continue shifting power out of the hands of the Mayor and into the hands of the people when it comes to police accountability and public safety. That’s why we’re kicking off our efforts to get people into position in the District Council elections coming up in February of 2023. Come out on Tuesday and join us!

Check CAARPR’s Facebook page for any updates on this event.

From Congregation KAM II:  KAM Isaiah Israel and Congregation Rodfei Zedek are co-sponsoring a program at KAM II to help us find ways to take action for reproductive justice. Hear from speakers from organizations including Planned Parenthood of Illinois, the Chicago Abortion Fund and Men 4 Choice.

Help assemble post-procedure kits for the Chicago Abortion Fund, and find out where donations are most needed, how to sign up as volunteers and what the most urgent needs are to keep abortion safe and legal in Illinois.

Childcare will be provided in a separate room. Light refreshments will be served. More details about the program and speakers will be coming soon.

SUGGEST: Got an event or resource to suggest for the newsletter? Email us here.

The mission of Indivisible Chicago - South Side is to unite south siders to fight for progressive values by exerting grassroots influence on our elected officials.

Move fast to convert outrage into action and supporters

What Federal, State and Local benefits are you entitled to?

Actions to take this week

Join Us Jan. 31: Voting in YOUR Police District In Chicago’s upcoming

IC-SS Special Update: Jan. 5, 2023  The Indivisible Chicago-South Side newsletter is